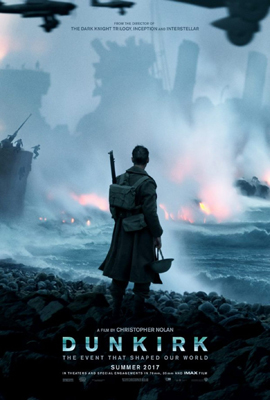 Avoiding lengthy exposition, writer/director Christopher Nolan’s “Dunkirk” is a movie where actions speak louder than words. In putting the audience right into the situations that unfolded during Britain’s daring rescue of 330,000 soldiers from Dunkirk, France’s shoreline in World War II without a lot of dialogue to dull the sensation, Nolan’s film is very much a “director’s movie”- a visceral experience that puts you alongside the protagonists as the events play out. In feeling like you are there, Nolan slowly tightens the tension by placing you squarely into the thick of things as the battle’s inherent danger develops.

In May of 1940, allied soldiers from Britain and France found themselves pushed to the shores of the city of Dunkirk, France by advancing German troops. With leaflets dropped by the Germans taunting them of their being surrounded and to surrender, British troops found themselves stranded at the beaches of Dunkirk and were mockingly made to look at the nearness of their homeland just 26 miles across the English Channel. As Dunkirk’s shoreline made larger British transport ships unable to get close enough to quickly remove the thousands of soldiers from the beachfront, the scarcity of available ships and the slow process of rescuing the remaining soldiers made for an arduous process- with home just out of reach, the English were forced to watch and wait for rescue as German planes sporadically rounded the shore to bomb the beleaguered fighters and extinguish their escape plan.

One of these soldiers is Tommy (Fionn Whitehead), whom Nolan chooses as the character we run alongside as he makes his way toward the beachfront. Running through the war-torn streets of Dunkirk to reach the shore, Tommy aids another soldier named Gibson (Aneurin Barnard) in burying the body of a fallen comrade before the two try to secure their own passage over the Channel by scrambling toward a ship carrying wounded soldiers back to England. However, the Germans have other ideas; the staggered time in the British evacuation plan gives them an opportunity to finish their job of genocide.

The highlights in “Dunkirk” come from its quiet. In ‘keeping calm and carrying on,’ we are lulled into watching the purposeful progress of the British as they forge to free their troops by land, sea and air: on land, British Commander Bolton (Kenneth Branaugh) oversees the ships’ arrivals and departures from shore; in the air, English pilot Farrier (Tom Hardy) looks to liquidate advancing Nazi planes; by sea, Mr. Dawson (Mark Rylance) steers his small fishing boat from England to cross the Channel and aid the allies’ return. Just when things quietly begin to right themselves and rescue plans move silently toward being solved, we’re jarred by surprise jolts of sound from unexpected German attacks. In “Dunkirk’s” best moments, Nolan seamlessly transports us between each of these angles- one view from land, sea or air looking toward another in same-time scenarios that allow us to become more enveloped in Nolan’s slowly-tightening chaotic micro chasm. The intimacy that Nolan delivers in “Dunkirk” is what’s most impressive- while this could have been sprawled across the canvas of a large-scale epic, Nolan smartly places the audience in small-scale scenarios for stronger effect.

While Oscar will certainly call for “Dunkirk” when nominations come out next year, it’s in Nolan’s skillful direction of intimate first-hand views amidst the chaos from various vantage points that should hold sway: they’re the likes of which I haven’t seen since Spielberg put us alongside the prisoners in “Schindler’s List’s” showers or the soldiers during “Saving Private Ryan’s” Normandy Beach bombings. Add to it the most stunning war sound effects I’ve heard since “Apocalypse Now” and a score from Hans Zimmer that sets the tone for “Dunkirk’s” pressurized race against time against approaching imminent danger (like John Williams’ score for “Jaws”) and you’ve got some of the best cinematic work you’ll see this year (of course, each of the films I’ve referenced are Oscar winners in their respective categories so you know where I’m leaning).

In capturing the chaos at Dunkirk that concluded with Winston Churchill calling its resolution a “miracle,” Christopher Nolan has created his own cinematic miracle. By displaying the resiliency and resourcefulness of the human spirit, “Dunkirk” is a knockout that stands as a testament to heroism in the most harrowing of times.