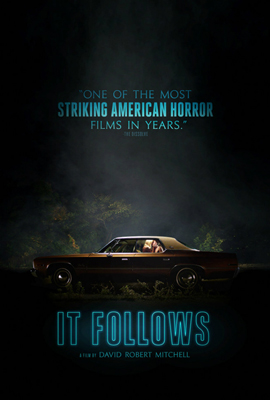 If you’re a college basketball fan, you’re in the midst of March Madness; if you’re a ‘70s and ‘80s horror movie lover, the real March Madness ‘shots’ and ‘scores’ come in the form of David Robert Mitchell’s horror film “It Follows-” a movie that incorporates the tracking ‘shots’ and musical ‘scores’ you’ve come to love from the early horror films of directors such as John Carpenter and David Cronenberg and uses their cinematic techniques and styles to create a film worthy of these directors’ earlier works.

Usually, if you see a director copying the film techniques of another director in a genre, it can more often than not feel like a cheat or dull your senses because you’ve already seen it done- and done better. However, there’s such a love and care in Mitchell’s crafting of “It Follows” that it blows right past the homage moniker one could easily dangle on this film. Just as you’ve experienced watching Quentin Tarantino bring back the style of ‘60s martial arts films with “Kill Bill” or Brian DePalma turning Hitchcock movies like “Psycho” into his own “Dressed to Kill” or using “Vertigo” and “Rear Window” as templates for his “Body Double,” Mitchell takes and uses past directing styles to create a film for horror fans that only a horror movie fan himself could accomplish. END_OF_DOCUMENT_TOKEN_TO_BE_REPLACED