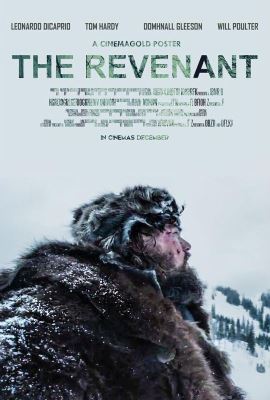 At its core, “The Revenant” is a throwback to those gritty revenge-fueled westerns that I’ve always loved: the protagonist sifting through the savage elements of the wilderness to exact frontier justice. Along the way, harsh weather, scarce food resources, and wild animals seem like child’s play against the real danger lurking out in the wild- man himself.

Leonardo DiCaprio stars as Hugh Glass, a guide to a group of fur-trappers collecting pelts for profit. After an invading horde of Pawnee Indians attack the group with an arsenal of arrows, the remaining small band of trappers flee by boat but are advised by Glass to abandon the water and retreat to their base by land to throw off the Pawnee. Glass knows the tracking ability and ways of Indians well, as evidenced by his half-breed son Hawk (Forrest Goodluck) who stays at his father’s side. This doesn’t sit well with one of the trappers, Fitzgerald (Tom Hardy) – not only doesn’t he agree with Glass’ plan, he has a true hatred for Indians after surviving an attempted scalping. Just seeing Hawk reminds Fitzgerald that Glass is not to be trusted. END_OF_DOCUMENT_TOKEN_TO_BE_REPLACED