Machines, Mind games, and Something else 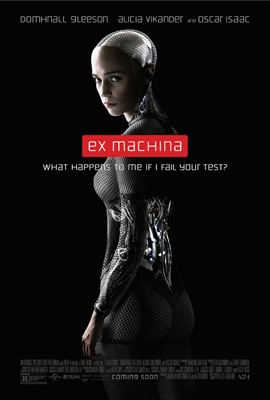 A good sci-fi movie poses a thought-provoking question that allows us to reflect on our humanity and place in the world; a great sci-fi movie allows that question to challenge our thinking and perceptions while entertaining us in the process. To say “Ex Machina” is a great sci-fi movie almost feels like a slight- it’s a movie that transcends its genre by being such a smart psychological thriller that you’re not likely to see a better film this year.

The story of “Ex Machina” centers on Caleb (Domhnall Gleeson), a computer programmer at the Web’s leading search engine Blue Book, who wins an office lottery to spend a week with Blue Book’s creator Nathan (Oscar Isaac) at his remote mountain estate: in layman’s terms, imagine working for Google if it were owned by Walt Disney and you won a week to spend with Disney behind-the-scenes at Disney World. Caleb is whisked away by helicopter to Nathan’s vast compound and a home that is more like a subterranean fortress hewn into the rock-something more akin to what a Bond villain would live in while he hatches his plan for world domination. And that’s not far from the truth in what Nathan is doing, as Caleb discovers. END_OF_DOCUMENT_TOKEN_TO_BE_REPLACED