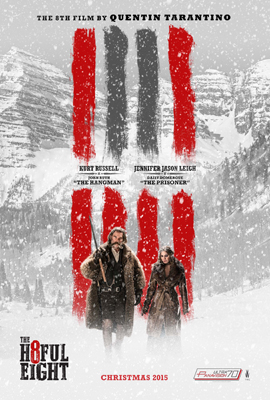 If you’re lucky enough to live around one of the 100 theaters showing the limited-run 70mm print of Quentin Tarantino’s “The Hateful Eight,” don’t miss it. It’s something that hasn’t been done in over 50 years; an extended version of a film before its wider theatrical release in a presentation that’s the best kind of Christmas present for a die-hard moviegoer.

Without boring you in explaining the technological benefits of 70mm film with the added visual and sound elements we’re accustomed to missing in our evolving digital age (sharper detail, wider framing, additional audio tracks), watching this exclusive engagement of “Eight” subconsciously reminded me of what I’ve also missed- going to a movie theater and feeling like I was actually attending a theatre: no preamble of previews, just an OVERTURE red-and-black frame of a stagecoach in front of mountains playing Ennio Morricone’s musical score to announce the start of the picture; after about 90 minutes and “Eight’s” first outburst of violence, a neat segue into a 15-minute INTERMISSION concluding with Morricone’s music signaling people back to their seats for the second-half of the movie. While cost-cutting measures and outdated equipment seemingly had this formatted-style of exhibition lost forever, Tarantino and the Weinstein Co. have lovingly recreated it to make this a truly special event. Of course, all of this praise would be irrelevant if “The Hateful Eight” wasn’t a good movie. For Tarantino fans, it doesn’t disappoint. In this special 70mm presentation, the experience makes “Eight” great. END_OF_DOCUMENT_TOKEN_TO_BE_REPLACED