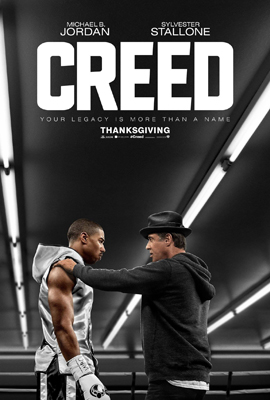 The best movie surprise this year may very well be “Creed,” a sequel to the “Rocky” franchise that manages to evoke all of what you loved about the original 1976 film and refashion the classic underdog story for a whole new generation of filmgoers.

You know the story: Rocky Balboa (Sylvester Stallone), an amateur fighter whose brawn is valued over brains by the Philadelphia street syndicate, is given a chance at boxing’s heavyweight championship via a slick PR move by reigning champ Apollo Creed (Carl Weathers) – Creed giving the chance to an unknown fighter dubbed “The Italian Stallion” from America’s birthplace during the bicentennial is too good a hook to pass up. Unfortunately, the plan backfires on Creed when he realizes Rocky’s literal left hook is just as good. Though Creed dodges Balboa’s bullet and retains his title in a split decision, Rocky proves himself in the ring and wins over the audience, including those in the theater- shot over 28 days for $960,000, “Rocky” won three Oscars (including Best Picture) and grossed $225 million. END_OF_DOCUMENT_TOKEN_TO_BE_REPLACED

“Room” achieves what independent films do best; it provides good actors with great material and uses a subtle approach to produce a deeper meaning. Given its sensational subject matter, “Room’s” subjectively-viewed character study gives the film a depth and strength lacking in studio movies. In its story of Joy (Brie Larson), a 24-year old girl trying to escape her 7-year kidnapped-confined prison with her 5-year old son, Jack (fathered by her captor), “Room” gives its audience a tense build to their literal breakout while providing a figurative breakout in the acting performance of Jacob Tremblay as Jack. END_OF_DOCUMENT_TOKEN_TO_BE_REPLACED

“Spectre” gives James Bond fans the long-awaited reunion of the classic super spy with his arch nemesis, the evil organization S.P.E.C.T.R.E. and, while highly-polished, does so in such a slow and tedious way to build to a comic-book climax that it really puts the “Uh-oh” in 007.

After 53 years of the James Bond film franchise, the expectations for any Bond film fan are pretty standard: gadgets, girls, guns, exotic locales, spectacular stunts, and an eccentrically extravagant villain hell-bent on world domination. Over the years, particularly in the mid-‘80s, the ideas and storylines in writer Ian Fleming’s original Bond novels had become exhausted and tiredly combined and copied to produce more Bond films- wasn’t 1985’s “A View to A Kill” just a pale copy of 1964’s “Goldfinger”? So, it was a relief when the Broccoli family, producers of the Bond films, decided to go back to basics and revitalize the franchise in 2006 with their adaptation of Fleming’s first Bond novel “Casino Royale.” END_OF_DOCUMENT_TOKEN_TO_BE_REPLACED