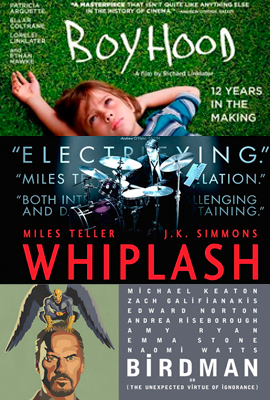 If you’re like me, when everyone trots out their ten best lists or Oscar predictions, I really don’t need six different people telling me the same movie’s good- I usually have a pretty good handle on what was worth watching. Also, the lists are mostly repetitious with the exception of an independent movie I’ve missed because it played in the theater for a week, so I’ll keep a mental note to catch that film when I can. No, what really interests me is the one film or performance that’s the most memorable, the one that stood out. In keeping with the tradition of the late Siskel & Ebert’s “If we picked the Oscars” specials, here are my standouts for 2014 using the main Academy Award categories. These are the films and performances that I’ll remember most- simply put, these are the ones:   END_OF_DOCUMENT_TOKEN_TO_BE_REPLACED

It’s ironic that the very vehicle that denied “The Interview’s” wide theatrical release is exactly the vehicle that allowed me to watch it, but thanks to the Internet I did. As a film that has already achieved groundbreaking cult status for being topically taboo, it’s one of the funniest movies I’ve seen in a long time. Comedically fast and furious, “The Interview” doesn’t disappoint. END_OF_DOCUMENT_TOKEN_TO_BE_REPLACED