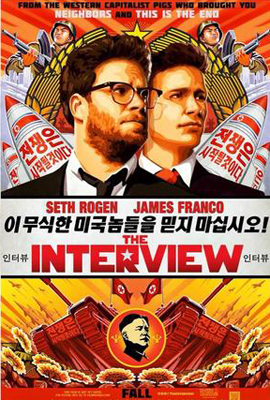 It’s ironic that the very vehicle that denied “The Interview’s” wide theatrical release is exactly the vehicle that allowed me to watch it, but thanks to the Internet I did. As a film that has already achieved groundbreaking cult status for being topically taboo, it’s one of the funniest movies I’ve seen in a long time. Comedically fast and furious, “The Interview” doesn’t disappoint.

Written by Dan Sterling (TV’s ‘South Park’ and ‘King of the Hill’) and directed by Seth Rogen and Evan Goldberg (“Superbad,” “This is the End”), “The Interview” stars Rogen as Aaron, producer of television’s tabloid talk-show ‘Skylark Tonight.’ Hosted by Dave Skylark (James Franco), ‘Skylark Tonight’ is the kind of TV show where celebrities drop the kind of revelatory bombshells that make it addictively popular. Among Skylark’s fans is North Korean leader Kim Jong-un (Randall Park) who, after gaining worldwide attention for test-launching a nuclear missile, reveals that he is a fan of the program. Egotistical and juvenile, Skylark sees this as an opportunity to reach out to Jong-un for an exclusive interview. Aaron, having long wished for serious broadcast journalistic status, complies and forwards the interview request to the North Koreans. Surprisingly, Jong-un accepts the invitation (much to the chagrin of the serious broadcasters who’ve longed for the exclusive sit-down). After announcing the pending interview exclusive, Skylark and Aaron are visited by CIA agent Lacey (Lizzy Caplan), who enlists the two to use this opportune meet to assassinate Jong-un. What follows is the training and execution of the plan and its inherent mishaps.

To give you an idea of what “The Interview” is like, imagine “Spies Like Us” remade by Quentin Tarantino. Franco and Rogen have the same respective role dynamic as Chevy Chase and Dan Aykroyd in John Landis’ 1985 film, and it employs the similar storyline of Tarantino’s “Inglourious Basterds” in its plot to assassinate Hitler (had “Inglourious Basterds” been made in the early forties, it probably would have provoked the same backlash from Germany as “The Interview” has now provoked with North Korea). But its crass and culturally-referenced dialogue is the real selling point of “The Interview,” and Franco and Rogen make a great comedic pair. In fact, I’ve never seen them in better roles- particularly Franco, who uses Skylark’s wounded child arrogant naiveté to great advantage.

“The Interview” makes no apologies for what it is, and that makes it admirable. Sure, the filmmakers could have fictionalized the dictator target and the audience would have known exactly who they were talking about, but the fact that they name names gives the film its subversive charm. The film also doesn’t create a buffoonish caricature of a dictator; it presents Kim Jong-un as a young man who has been given the task of leading a country after his father’s death, and so identifies with Skylark’s own father-induced wounded child psyche, bonding with him. Like a kid himself, Jong-un has tricked out his palace like MTV’s ‘Cribs’ with fancy cars and a basketball court. He even takes Skylark on a joyride with a military tank, firing missiles into the mountainside as Katy Perry’s “Firework” blasts through the tank’s interior soundsystem. These scenes between Park and Franco showing Jong-un and Skylark bonding are among the film’s best.

If being topical is a crime, than “The Interview” is criminal. Given the political turmoil the film has created and subsequent limited release shouldn’t detract from your enjoyment of the film if you’re able to watch it, it does what it sets out to do- it makes you laugh. Ultimately, that’s all you want a comedy to do.