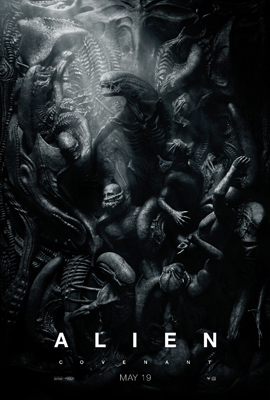 While it’s not the summer scare-fest you anticipated, “Alien: Covenant” is a necessary step in the “Alien” franchise story arc. Structurally sound, it manages to continue the “Alien” origin story with a savvy mix of gothic horror and sci-fi that ultimately succumbs to its B-movie beginnings.

In 1979, director Ridley Scott made what he described as “a B- horror movie with a grade-A monster;” his film “Alien” went on to become one of the best regarded sci-fi/horror films of all time. “Alien” spawned four sequels; most notably James Cameron’s inspired 1986 film “Aliens” that amped up the action by depicting a battle with a multitude of Scott’s grade-A monster. When subsequent sequels (“Alien3,” “Alien: Resurrection”) seemed to return to B-movie rote, Scott returned in 2012 to direct “Prometheus,” a film to show everyone there was more to the “Alien” story than just a routine rehash- he offered an origin story to explain how the monster was created. With “Covenant,” he finishes “Prometheus’” story; as “Prometheus” may be considered “Alien’s” prequel, “Covenant” can be considered Scott’s prequel for Cameron’s “Aliens.”

“Alien: Covenant” derives its title from the USS Covenant, a spaceship carrying hyper sleeping colonists to a new life on a new planet. Intercepting a distress signal from a planet near their destination, the Covenant’s crew (that includes Billy Crudup, Danny McBride and Katherine Waterston) dispatches a team to investigate. Upon reaching this mysterious planet, the team finds it oddly perfect for a burgeoning colony except for one oddity- it’s eerily silent. While the planet matches Earth’s atmosphere, the absence of any noise from nature is noticeable. Upon further investigation, the crew encounters more in this space oddity: dog tags belonging to Dr. Elizabeth Shaw, a Weyland Corporation employee (like themselves) from the USS Prometheus and source of the signal. As they trample over the terrain, small egg-shaped plants are soon trampled over, emitting airborne pathogens. These pathogens give a couple of the Covenant crew members something they hadn’t bargained for- becoming unwitting hosts to gestating grade-A monsters. As these monsters evolve and dislodge from their Covenant crew hosts’ bodies, David (Michael Fassbender), the android who escaped the Prometheus with Dr. Shaw, emerges to enlighten the remaining Covenant crew as to what’s really going on- and who’s potentially really going down.

If you’ve watched the films in the “Alien” franchise, “Covenant” offers a cool origin story set-up (thanks to story idea help from “Logan” scribe Michael Green and a script co-written by “Skyfall’s” John Logan). The film also manages to carry “Prometheus’” existential themes of life’s creation and our quest to discover its mysteries into an effective opening prologue, between David (Fassbender) and his creator, company owner Peter Weyland (Guy Pearce), giving “Covenant” an ominous overtone as to what will transpire. However, Scott knows why you bought a ticket- it’s those acid-dripping aliens you’ve come to see. When it deviates from its existential explorations, “Covenant” succumbs to standard B-movie shenanigans.

While the sci-fi effects are super, the scenes and scenarios of the alien attacks offer nothing new (some look similar to previous “Alien” movie outings). What I found new and interesting was the character storyline for David and his portrayal by Michael Fassbender- they give “Covenant” a unique, gothic horror charm. In discovering what’s been occupying David’s time on this mysterious planet, along with David explaining what he’s found to Michael, his “Covenant” A.I counterpart (also played by Fassbender), Fassbender delivers in a dual acting role. Finding a devious depth to the gory goings-on made me reflect on one of my favorite things about the original film “Alien”- Ian Holm’s performance as Ash, the A.I that goes awry: Fassbender acting against himself in scenes that plant this seed of android anarchy in the “Alien” universe was fun to watch.

While “Alien: Covenant” failed in my expectation to have my knees knocking, I can’t knock Ridley Scott or the movie for what it ultimately is- a necessary step to explain the origin for one of film’s favorite extraterrestrial evils.