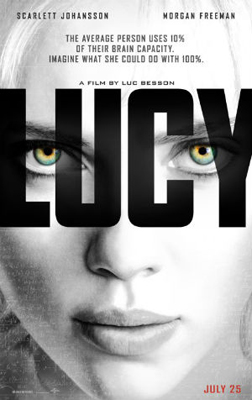 If you were seated at a table with a pregnant woman eating pickles and ice cream, you might be disgusted by the combination and yet, if you liked both pickles and ice cream, would be curious as to how they both tasted together. While you’d never indulge in eating this yourself, you can’t fault the pregnant woman for satisfying her cravings and would never think of taking the dish away from her. You can’t take the dish away from her because you like her; she enjoys it so you sit back at the table and watch her enjoy eating.

That’s how I felt watching Luc Besson indulge in mixing an action thriller with a science fiction hook in his new film, “Lucy,” an interesting hybrid of these two genres that if you allow yourself to think too much about the “why” or ask too many logical questions, you’ll really get disgusted. But, if you watch Besson combine these two genres that he loves and has shown a talent for- with his action thrillers “La Femme Nikita,” “The Professional” and in his writing of “Taken” or in his passion for sci-fi evident in “The Fifth Element”- you’re better off just sitting back and watching the pregnant woman eat.

“Lucy” is a movie where the audience is the observer, never a participant. The storyline and characters are akin to any comic book or graphic novel. Lucy (Scarlett Johansson) is a girl recruited by her boyfriend to deliver a locked briefcase to Mr. Jang (Min-sik Choi, of Korean thrillers “Oldboy” and “I Saw the Devil” fame). As Lucy delivers the briefcase, Jang’s crew swoops in, holding Lucy hostage- Besson intercuts these scenes of the dropoff with shots of a cheetah stalking and killing an antelope (let the pregnant woman eat). She quickly finds that the briefcase contains a synthetic drug named CPH4, whose blue crystalline powder in small doses contains the biological power to “grow the bones of unborn fetuses.” Jang surgically implants one such packet of CPH4 into Lucy, intending to make her a drug mule. However, when one of Jang’s goons kicks her and ruptures the packet inside her body, the drug begins coursing through Lucy’s bloodstream. Lucy begins to discover that she is now, thanks to the drug, able to use more and more of her brain’s capacity. Not only does this increase in using her brain’s capacity allow Lucy to violently foil her captors and escape, she begins to acquire knowledge and powers that were previously locked within her untapped brain’s resources.

The movie chronicles and segments each increase in Lucy’s brain percentage capacity. As each segment grants Lucy more access to her brain’s resources, it allows her to (among other things) read minds, understand foreign languages, enjoy the power of telekinesis, communicate through any electronic medium, and alter her physical appearance. With her newly-acquired and increasing power, Lucy enlists the help of two men: a French detective named Del Rio (Amr Waked) to track down the other drug mules that Jang has implanted with CPH4, recover the remaining drug packets and stop Jang; and Professor Norman (Morgan Freeman), an expert in the field of neuroscience who realizes that with Lucy’s ever-escalating brain capacity, she can use her knowledge and experience to educate scientists before she succumbs to the powers acquired through 100% brain capacity- let’s face it, after 100%, where do you go from there? Besson shows us where, in his Spinal Tap “these go to 11” way.

Again, the “why” and logic are thrown out when it comes to watching “Lucy.” As trippy as the movie can be, it’s a different take on the mixing of the action and sci-fi genres. While the action that you know Besson best for slowly morphs into its sci-fi bent, it does have its moments. Lucy’s molecular breakdown on a flight is reminiscent of William Hurt’s changing forms at the end of “Altered States” and the climax of “Lucy” borders on Dave Bowman’s experience in journeying toward the Star Child in Kubrick’s “2001: A Space Odyssey.”

Also, “Lucy” is not an actor’s movie although I like the actors in it. These are cookie-cutter characters plugged into their generic roles: scientist, cop, drug lord. And Lucy? The audience can’t get too invested in a character that evolves into something beyond their comprehension. While the lack of Lucy’s character development disconnected me from caring, Besson does manage to impart, through action and sci-fi, his take on chronological time- time in its grandest, spacial and life-altering force. In literal time, “Lucy” clocks in at a meager 90 minutes and, with everything that Besson jams into those 90 minutes, one can only sit back and watch him try to catch a deluge in a paper cup (yes, I borrowed that from Crowded House’s “Don’t Dream It’s Over”).

With “Lucy,” I’ll indulge Besson in trying to satisfy his cravings. I like him enough that I’ll let him eat.