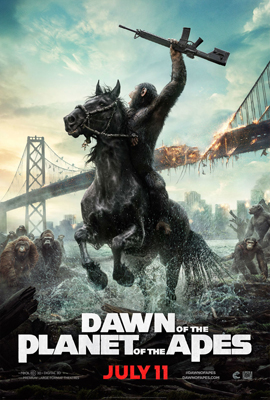 While I wasn’t a fan of this franchise, I did like the first “Planet of the Apes” from 1968 with Charlton Heston, mainly because I’m a Rod Serling fan and Serling wrote the original story. What followed were four sequels in the ‘70s as well as a subsequent TV series. Yet no matter how entertaining talking apes carrying semi-automatic weapons while riding horses and capturing humans may be, watching Roddy McDowall kiss/nuzzle Kim Hunter with a prosthetic monkey mouth just looked creepy. Even Tim Burton’s updated remake in 2001 had promise, but the rehash was just a novelty that made you remember how good the original really was.

So I was pleasantly surprised by 2011’s “Rise” but not surprised at why I liked it- it had a brain. Isn’t it more interesting to see how the apes became smart, learned to talk and see just how they took over the planet? I think so, which is why designing a prequel for the franchise reboot was a great idea. Also, there was a sense that the filmmakers actually cared about the material and were fans of the franchise themselves- “Rise” had a logical, thoughtful story. Here was an original take on a beloved film series that could find new devotees to the Planet of the Apes franchise while at the same time give fans of the old films something new to add to the fun they had experienced. The filmmakers of “Rise” and “Dawn” have done just that with this reboot and, in doing so, have probably also spared themselves answering a litany of pointed questions and fending off heated arguments from a man dressed as Dr. Zaius at the next Comic Con.

“Rise” set the groundwork with its story of a domestically-raised chimp named Caesar who develops high-functioning cognitive abilities through a test drug for Alzheimer’s called ALZ 113. Caesar quickly learns that no matter how intelligent the drug has made him, humans don’t need or understand smart apes living among them. Sent to an animal control facility, Caesar is locked away with other simians and, in finding a way to give the apes doses of ALZ 113, makes them “like-minded” as well. The apes break out of the facility, run through modern-day San Francisco, tangle with a bunch of humans on the Golden Gate Bridge, and manage to escape into the forests outside of the city to begin a new life away from mankind.

“Dawn”, like all good sequels, spares us tedious flashbacks and picks up the story with Caesar 10 years later. As referenced in “Rise”, a lab technician contracts a disease in his exposure to ALZ 113 while testing it on a chimp- he dies and becomes patient zero to a virus known (thanks to testing it on the lab chimps) as the Simian Flu (as if the apes didn’t need another reason for man to hate them). While the human population is dying, Caesar and the other apes have built a village in the forest. The apes live well together as a family and have a home. Caesar has a family of his own- a wife and two sons. In fact, the apes haven’t seen any signs of humans for the previous two years and wonder if mankind still exists. One day, they get their answer.

In the hope of generating energy for their nearly-depleted city, a few humans led by Malcolm (Jason Clarke) wander into Caesar’s “neck-of-the-woods” to resurrect an old power-supply dam. The apes make it known that the humans are not welcome and drive them out. The apes further emphasize this point by banding together and entering the city to tell the remaining inhabitants, led by Dreyfus (Gary Oldman) to stay away. However, Malcolm returns to the ape compound to peaceably plead their case. Caesar, being raised domestically, knows desperate humans take stupid and violent actions. He sees the desperation in Malcolm and grants access to the dam to restore power in San Francisco. This seeming truce between humans and apes does not sit well with Koba, a physically scarred former lab chimp that wants revenge on mankind for the past pain he’s suffered.

Caesar’s acquiescence to the human’s desire to survive directly conflicts with Koba’s desire to wipe out mankind before the Simian Flu can do it for him. This provides one of the better scenes in the movie when Koba confronts Caesar about his decision to let the humans work on restoring the power-supply dam. In explaining his reasoning, Caesar tells Koba that human desperation will force them to violently secure the dam and to just let the humans work. Koba begins pointing to the various scars on his body, showing Caesar that his scars are also “human work”.

CGI effects aside, there’s a lot to admire about “Dawn of the Planet of the Apes”. In addition to Matt Reeves’ direction, the screenplay contains a nice parallel in the conflicts seen not only between Caesar and Koba but also in their human counterparts, Malcolm and Dreyfus- Malcolm as the man who wants a peaceable existence with apes and Dreyfus who knows the only good smart ape is a dead smart ape. While there’s good and bad in every species, each of these characters gets to experience first-hand the good and bad in their respective species and the movie provides a nice balance between the ape and human worlds.