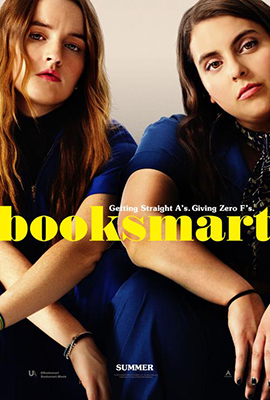 It’s a rare high school comedy that manages to be both funny and insightful. Rarer still are those dodging easy crude laughs for introspective hard truths. “Booksmart” does both with a genuine feel for the speech and circumstances teens find themselves in on the brink of adulthood.

Molly (Beanie Feldstein) and Amy (Kaitlyn Dever) are best friends about to graduate high school and have forgone the frivolity of a student’s social scene in favor of academic advancement (Molly has been accepted to Yale in her quest to be a Supreme Court justice, Amy has decided to take a gap year and go to Botswana on a service mission). On the eve of their graduation, Molly angrily finds that her clowning partying classmates have had their cake and eaten it too- they’ve also been accepted to Ivy League schools. Like a gambler trying to get even, Molly rallies Amy to take revenge on their self-imposed repression by crashing a popular classmate’s party before high school ends and cram the four years of fun they’ve missed into one night.

Normally, a premise like this would lead to the drug and alcohol-fueled mayhem of the inexperienced but “Booksmart” takes an introspective approach. Molly and Amy, by not partying with their peers, have also deprived themselves of love: while Molly has her eyes on Nick (whose party they seek), Amy has come out as gay but never acted on it. In their odyssey to find Nick’s party and quench their dating drought, the girls visit other parties thrown by fellow outsiders in their class and, as “Booksmart” reveals, you can’t judge books by their covers.

By avoiding perceived stereotypical staples and juvenile humor, “Booksmart” is not the female-version of “Superbad” you’d expect. Instead, it connects all of our universal teen trepidations into an underlying carpe diem catharsis: our experiences expand our knowledge. It’s a message that makes “Booksmart” smart. It also feels fresh, thanks to Feldstein and Dever’s performances as Molly and Amy. Though you’ve seen both actresses in supporting roles (Feldstein in “Lady Bird” or Dever in “Short Term 12”), they’re compelling leads: Feldstein’s take-charge attitude as Molly complements Dever’s reserved rationale as Amy.

Equally fresh is the film’s direction from first-timer Olivia Wilde. In her directorial debut, the actress may be one of the reasons the cast of “Booksmart” breaks the mold of the caste system set by other teen comedies. Sure, the character labels are there but, like her movie, they provide more than meets the eye.

Cut from the same cloth of films like John Hughes’ “The Breakfast Club” and Cameron Crowe’s “Say Anything,” “Booksmart” is an admirable look at teen angst that manages to blend all of the hell and hijinks of high school into a caring character-driven coming-of-age story.