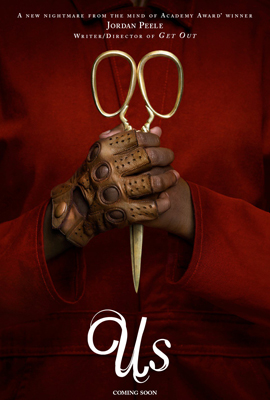 In his follow-up to “Get Out,” Jordan Peele replaces suspense for straight-out horror in “Us” and the results are a mixed bag: while the set-up is scary, the cause for the chaos gets convoluted.

Lupita Nyong’o stars as Adelaide Wilson, a woman vacationing with her husband Gabe (Winston Duke) and two children Zora (Shahadi Wright Joseph) and Jason (Evan Alex) near Santa Cruz, California. In true horror fashion, Adelaide had a traumatic event occur to her as a child in Santa Cruz and neglected to mention this to Gabe, so just being there fills Adelaide with dread.

After her son Jason wanders off from the family on the Santa Cruz beach, Adelaide’s memory of her trauma comes flooding back: she also wandered off near the Santa Cruz boardwalk as a child, entered an empty funhouse, and saw her reflection in the mirror- only it wasn’t just a reflection, it faced the other way. Finding Jason, the family goes home and Adelaide spills her story to Gabe, asking they leave as she feels “a black cloud” over her.

The “black cloud” soon reveals itself as four people standing at the end of their driveway. They break into the Wilson home and confront the family. To the Wilsons’ horror, these four intruders look exactly like them, save for their strange zombie-like expressions and movements. Adelaide’s double is raspy-voiced Red, who tells the Wilsons why they’re there: after living as the Wilsons’ shadows for so long, they want to be free to live “untethered.” Seeing their doubles brandish gold-plated scissors, the Wilsons realize this “untethering” equals trouble.

What follows is classic home invader hunting with each of the family members doing battle with their respective doppelganger- it’s well-paced and proves Peele knows how to direct horror. But Peele’s got more up his sleeve for this story and “Us” pays the price when Peele shows all of his cards. Unlike “Get Out’s” overtone of race relations that added an edge, there’s no overtone when the “black cloud” of “Us” expands until the intimacy that makes the Wilsons’ plight truly terrifying breaks apart. Though Peele justifies his jaunt outside of the isolation, he loses the claustrophobia and contained creepiness. Had the scope of the film remained smaller, “Us” would have had more impact.

Despite your reaction to the film, there’s no denying Lupita Nyong’o gives a great performance. While she’s already got an Oscar under her belt for “12 Years a Slave” and garnered new fans as Nakia in “Black Panther,” she really pulls out the stops as Adelaide and her alter-ego Red. While playing the tearfully traumatized Adelaide may seem a walk-in-the-park for an actress of her skill, the contrast in her role as Red mesmerizes: with an unblinking stare and frenetic body movements, Nyong’o gives Red all of the eeriness of an unformed phantom.

While “Us” broadly states its reasons to scare, I prefer the true horror of evil existing without explanation.