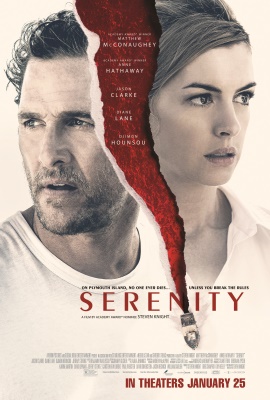 It’s never too early to be the worst movie of the year, and “Serenity” proves it.

Under the guise of a steamy film noir, “Serenity” plays out like a bad Spanish soap opera. The script has nothing but broadly-drawn characters, allowing McConaughy and Hathaway to overact badly: scenes of the Oscar winners chewing scenery as Baker’s tortured soul is pitted against Karen’s manipulative sex kitten make you forget the two won acting awards.

Adding to the mystery of how “Serenity’s” script attracted an all-star cast is the mystery within the plot, a Twilight Zone-twist so outrageous a scene is written to reiterate what’s going on (not for any of the characters to understand but for the audience to accept the audacity of what they’re witnessing).

Audacious is the word for “Serenity”- it’s laughably bad (had it not been, I probably would have checked out of the movie early). Coming from writer/director Steven Knight (who wrote Stephen Frears’ “Dirty Pretty Things” and David Cronenberg’s “Eastern Promises”), it’s especially surprising how deep one has to delve to be this ludicrous.

With the film’s release coming halfway between Martin Luther King Day and Black History month, the Reverend King himself may have summed up this movie best: “Let us realize the arc of the moral universe is long, but it bends toward justice.” Unfortunately, “Serenity’s” ‘justice’ is simply a big, rotten fish.