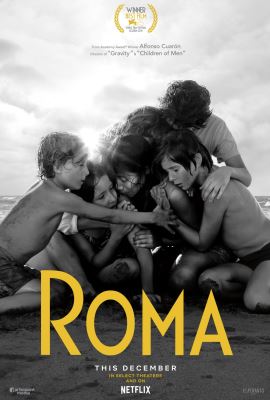 Now on Netflix is Alfonso Cuaron’s “Roma,” an early Oscar favorite for directing and Golden Globe nominee for director, screenplay and foreign film. While most may give pause to watching a black-and-white, subtitled domestic drama with scenes in the style of Italian director Federico Fellini, those who see “Roma” may be as absorbed as I was.

Far from flashy, Cuaron has crafted a love letter to the two women who raised him (his mother and maid) and is set in Mexico City at the end of 1970. What draws you into “Roma” are long scenes that breed an intimacy and familiarity with the upper-class home tended to by live-in housekeeper Cleo (Yalitza Aparicio), who works for Antonio (Fernando Grediaga) and Sofia (Marina de Tavira). While Cleo shares her duties with cook Adela (Nancy Garcia Garcia), we’re focused on Cleo as she cares for the couple’s four children, cleans the house and washes the interior driveway set off the city street.

Upon returning from work one day, Antonio is agitated and tells Sofia he’s unhappy with Cleo’s work: the driveway is littered with dog feces and he can’t find clothes to pack for his business trip. Cleo overhears but Sofia never confronts her. When Antonio leaves for business the next morning, Sofia hugs him like she may never see him again- we sense the dread that what lies outside this home will soon impact the story.

Struggles soon play out for both Sofia and Cleo. In Cleo’s case, her problem is one where she can only turn to Sofia. Afraid of losing her job after Antonio’s outburst, Sofia is surprisingly supportive and it’s here that the intimacy of “Roma” pays off: not only do we get caught up with Sofia and Cleo’s individual dilemmas, we see how these two women from different social classes work together to combat common female foibles.

Having already won a directing Oscar for 2013’s “Gravity,” Cuaron is really at the top of his game with “Roma.” Using prolonged one-take scenes to his advantage, it’s a film that draws you into life’s drama- our lives don’t have jump cuts, so the pacing works. Also, there are segments clearly inspired by the films of Fellini, where ordinary events shift into an absurdist overdrive.  Not many have successfully integrated Fellini’s style into their work (Woody Allen’s “Stardust Memories” was just Allen’s copy of Fellini’s “8 ½”), but Cuaron does it here. In a trademark style that spoke to finding life’s beauty and wonder in typical events having untypically inspired humanistic elements, Cuaron channels Fellini well.

There are other reasons to like “Roma:” the black-and-white cinematography is the cleanest and clearest I’ve seen in a while; Aparicio as Cleo gives the best reserved acting in a servant’s role since Anthony Hopkins in “The Remains of the Day.”  I was surprised how caught up I became in “Roma,” a movie named for the Mexico City neighborhood it’s set in, not the Italian influence you’d expect. But there is an Italian influence with Fellini and Cuaron’s “Roma” benefits nicely from it.