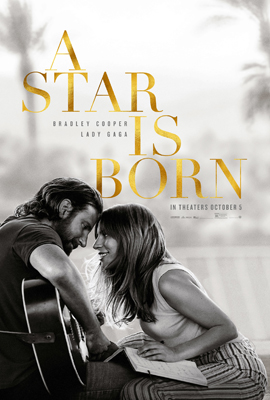 In his directorial debut, Bradley Cooper manages not only to make “A Star is Born” the best film version we’ve seen so far while giving his best acting performance to date, it may also be the best movie you’ll see this year.

For those unfamiliar with “A Star is Born,” it’s the classic tragic love story to cinema as “Romeo and Juliet” is to theater: an alcoholic male celebrity sees raw talent in a female he’s instantly attracted to and guides her to becoming a star in her own right.

While the first film version of “Star” was in 1937 with Fredric March and Janet Gaynor falling in love, the story got its best treatment in 1954 with James Mason and Judy Garland. In the 50’s, everyone sang in movies and Garland could sing. She belted out “The Man That Got Away” and Mason and Garland won Golden Globes for their performances and were nominated for Oscars. In 1976, Barbra Streisand and Kris Kristofferson remade “Star” with both characters as singers but Oscar only smiled for “Evergreen” as Best Song. In “Star’s” natural progression though film, Cooper’s fourth outing should have Oscar smile more favorably, maybe with more wins.

‘Natural’ is the key word for Cooper’s take on the tale, and that’s what makes it so good. Never forgetting that buying into the love story is paramount, Cooper lets the relationship unfold organically and keeps the key elements of the story intact (thanks to a screenplay he co-wrote with Eric Roth, Oscar-winner for “Forrest Gump”). Cooper plays Jackson Maine, a country rock superstar who sells out stadiums and is as comfortable shredding an electric guitar as he is plucking an acoustic. Maine sings well, despite his pill-popping, gin-fueled demeanor. After one sold-out show in a strange town, he has his driver stop at the nearest watering hole to relubricate and runs into a drag club where one of its female servers takes the stage. She is Ally (Lady Gaga), a tough, cynical singer who has just broken up with her boyfriend and has been repeatedly rejected in her musical aspirations for her deemed unattractiveness. As Jackson sits at the bar, Ally stunningly sings “La Vie En Rose” in French and struts around the bar cabaret-style. Ally locks eyes with Jackson as she finishes her song; Jackson is smitten- it’s a fait accompli.

Jackson pursues Ally and they spend the night talking. Despite Jackson’s celebrity, he’s down-to-earth, says she’s beautiful and wants to know more about her. Ally is worn down by Jackson’s attention and, despite her recent break-up, opens up to him about being a songwriter. As dawn approaches, Jackson’s confidence in Ally makes her sing one of her songs. He drops Ally at home and invites her to his next show. Jackson’s driver visits her the next day to whisk her away to the concert and while she’s at first apprehensive, Ally relents. While she waits in the wings, Jackson performs onstage and tries to get Ally to join him. She refuses until Jackson begins to sing Ally’s song from their night together. Ally joins him onstage, overcome with emotion, and belts out her song “Shallow” as a duet with Jackson- it’s the linchpin that seals their love.

The rest of “Star” follows Ally gaining notoriety but Gaga singing “Shallow” is like Garland’s “Man That Got Away” moment- it’s the butterfly emerging from the cocoon. Cooper’s version sucks you in. Though we know Gaga can sing, we discover Cooper can sing too. Though we know Cooper can act, so can Gaga. Their chemistry and discovering Cooper and Gaga’s other talents are an instant connection for the audience.

“Star’s” soundtrack is full of good songs. As for acting, Cooper outdoes himself as an addict: never over-the-top, it’s always on the periphery and the self-destructive element (as we saw in “Silver Linings Playbook”) is ever evident. Lady Gaga is also impressive, making the most of Ally’s tough, cynical make-up that melts in a Cinderella-style romance. Her acting reminded me a lot of Cher’s Oscar-winning work in “Moonstruck.” Even the supporting cast is sound: Sam Elliott as Jackson’s brother and caretaker, Andrew Dice Clay as Ally’s father (showing he can act as well as he did in Woody Allen’s “Blue Jasmine”) and Dave Chappelle as Jackson’s best friend.

Bradley Cooper’s “A Star is Born” was a four-year labor of love that paid off for the actor who wanted his directorial debut film to be a love story; he picked a classic and wound up making a classic of his own.