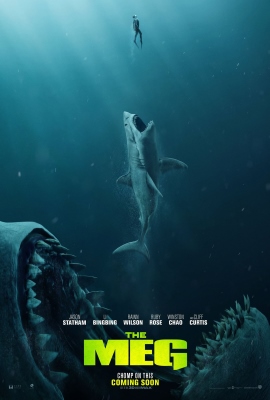 Lacking the suspense or dazzling special effects to keep you riveted, “The Meg” is forced to breathe too much life into its cookie-cutter characters when all you want is Statham vs. Shark non-stop action.

“The Meg” in the title refers to Megalodon, a 70-foot shark not seen since prehistoric times. In the film’s opening sequence, Navy Captain Jonas Taylor (Jason Statham) mans a deep-sea rescue operation to the depths of the Philippines’ Mariana Trench and aborts the mission, abandoning and killing those left stranded, when the hull of the downed craft begins to cave in from an outside force. Jonas, convinced it was a massive sea creature and not just ocean-depth pressure on a weakened hull, is subsequently dishonorably discharged and finds exile in Thailand where he can explore the depths of countless Thai beer bottles.

Five years later, a Chinese research lab in the Pacific Ocean has found a “false-bottom” on the ocean’s floor- a gaseous layer that an exploratory craft penetrates to reveal a previously undiscovered subzero stomping ground for, you guessed it, ‘Meg’. Attracted by its bright lights, Meg cripples the craft. The crew aboard the research lab knows there’s only one man that can rescue the disabled divers- Jonas (i.e. the Stathe!).

The discovery of Meg, proving Jonas wasn’t crazy all those years ago, coupled with the fact that Jonas’ ex-wife, Lori (Jessica McNamee) manned the downed craft, spring Jonas into action. Deftly diving through the ocean bottom’s gaseous layer to rescue them, Jonas unwittingly opens a porthole that releases Meg into the Pacific and sends this “Moby Dick” tale of Meg vs. Stathe into a bigger arena.

After this set-up, a cat-and-mouse game of man vs. mammal would have been just fine. However, “The Meg” tries to bolster its stereotypical supporting characters with reasons-for-being other than just being Meg’s next meal: Morris (Rainn Wilson), the billionaire who funds the research and sees Meg’s discovery as a goldmine; Suyin (Bingbing Li), the daughter of the research lab’s director who dives with the best of them to prove her worth to Daddy; DJ, the African-American crew member whose supplies comedic relief by announcing the irony of his inability to swim; Meiying (Shuya Sophia Cai), Suyin’s precocious eight-year old daughter who tells Jonas her Mom likes him by pumping her eyebrows in a ‘hubba-hubba’ gesture (I would never condone hitting a child, but fictional children? Have at it).

Given its goofy premise, I saw where “The Meg” wanted to go but knew its limitations. Stuck in B-monster movie mode, it wanted to be more like 1987’s “Predator,” another goofy premise of Schwarzenegger vs. Alien that paid off because it was commando mano a mano. “The Meg’s” suspense lies only in Statham’s ability to contain and kill it before it wreaks havoc on the outside world, but Meg isn’t afforded the intelligence to dodge any traps laid before it, thus removing any audience anxiety or, in layman’s terms, fun.

Favoring character catharsis to all-out chaos, the film’s ‘Jaws’-dropping special effects are reduced, giving us nothing more than a big fish with snapping, sharp teeth. If only “The Meg’s” script could have been as sharp.