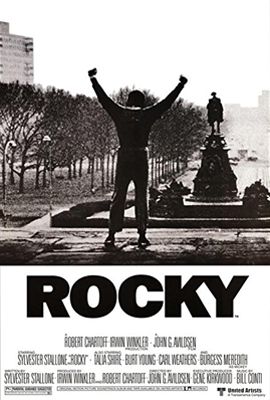 The underdog from Philly versus the reigning champ- it’s a sports scenario we’ve seen before. In the rare case of life imitating art, the Philadelphia Eagles are 4.5 point underdogs to reigning NFL champs New England Patriots going into Super Bowl LII and that makes 1976’s “Rocky” all the more relevant.

“Rocky” is the consummate underdog movie for more reasons than just its plot. After a series of bit parts in early-‘70s films that included Woody Allen’s “Bananas” and Alan J. Pakula’s “Klute,” 28 year-old budding actor Sylvester Stallone got inspiration watching a boxing match between Muhammad Ali and Chuck Wepner, nicknamed the “Bayonne Bleeder.” After three days of continuous writing, Stallone created the screenplay for “Rocky,” the story of an amateur fighter whose brawn is valued over brains by the Philadelphia street syndicate and is given a chance at boxing’s heavyweight championship via a slick PR move by reigning champ Apollo Creed (Carl Weathers), who sees giving the opportunity to an unknown fighter dubbed “The Italian Stallion” from America’s birthplace during the bicentennial as too good a hook to pass up. Once in the ring, Rocky’s trademark windmill left hook proved Creed had underestimated him.

“Rocky’s” script gained interest and Stallone agreed to sell it with the proviso he play Rocky himself. With only $106 to his name, Stallone’s gamble paid off (agreeing to be paid actor’s scale and the film’s budget cut in half to give Stallone his starring shot). Bicentennial fervor was in Stallone’s favor as art impressed itself upon life: “Rocky” became a box-office hit and the best picture Oscar-winner of 1976, impressively besting film classics “Network,” “Taxi Driver,” and “All the President’s Men.”

Given Rocky’s roots in Philadelphia, I want to see art impressing itself on life once again. Rocky may have narrowly lost in a split decision to Creed in 1976, but “Rocky’s” success dictated a rematch in 1979’s “Rocky II” and Rocky became champ. With the upcoming Eagles-Patriots Super Bowl being a football rematch from 2005 (the Eagles narrowly losing to the Pats by 3 points in Super Bowl XXXIX), this upcoming sequel should embrace the Philly underdog with an Eagles victory in true “Rocky” fashion.

As a lifelong Eagles fan, I may seem biased, but the Eagles will win this upcoming game if only for what Stallone experienced in 1976: the stars are aligned and fate has come to fruition. Just attending an Eagles game at Lincoln Financial Field (affectionately known as “the Linc”) and watching the prelude to the team’s introduction with the big stadium screens showing a montage of the training portions from “Rocky” as Bill Conti’s Oscar-nominated theme swells is enough to leave pundits pumped remembering Philly’s favorite cinematic son.

Though he may not trudge through the Minnesota snow to attend the game like he ran through the snow training to fight Drago in “Rocky IV,” I would think ‘Rocky’/Stallone’s “gonna fly now” to be at U.S. Bank Stadium to support his brethren Birds on February 4th. Shouting “Yo!” from his stocked VIP luxury suite as the Eagles secure their first Super Bowl win may seem like a flight of fancy, but it’s not- the time is nigh.

As Stallone might tell you from first-hand experience, attaining the American dream isn’t a whim, it’s a success born from hard work and a belief that’s been carried on the wings of an eagle since 1776.