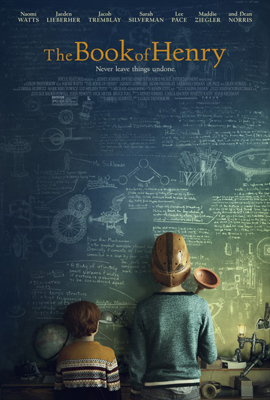 I believe you can’t appreciate the good without experiencing the bad. As we await the announcement of the Academy Award nominees, I like to watch one of the worst films that 2017 had to offer to satisfy my own “checks and balances:” a little nugget titled “The Book of Henry” satisfied my search.

Audacious in its premise, “The Book of Henry” traps you into believing you’re about to watch a coming-of-age tearjerker before veering wildly into a vigilante-fueled actioner. As unlikely as oil and water mixing (though a foreign sensibility could have made this scenario fodder for black comic, unpredictable fun), “Henry” succumbs to the American leaning toward spelling everything out to its audience to make it believable- and that’s where it fails. Bizarrely banal, “Henry” stars Naomi Watts (past Oscar-nominee for “21 Grams” and “The Impossible”) as Susan, the single mother of two sons, Henry and Sam- played respectively by child actor wunderkinds Jaeden Lieberher (“St. Vincent,” “It”) and Jacob Tremblay (“Room,” “Wonder”). While Lieberher and Tremblay were redeemed with box-office successes last year with “It” and “Wonder,” Watts wasn’t so lucky- and “Henry” proves it.

In the quaint upstate New York town of Cavalry, 11 year-old Henry (Lieberher) is the kind of gifted kid who reads constantly, entertains his brother Sam (Tremblay) by creating inventive, complicated and unnecessary contraptions involving rolling billiard balls down ramps to knock something into something else to squeeze icing onto Sam’s cupcake in a treehouse way-to-well-designed judging from the materials alone, and keeps the financial books for his waitress mother, Susan (Watts). Though Henry’s teacher tells him he’s too bright to stay in his standard school, Henry (ever the pragmatist) tells her keeping his classmates’ company grounds him socially and gives him a kind of empathetic education. When he isn’t calling his stockbroker outside of school to keep Susan’s portfolio solvent, Henry admonishes his mother for any apathy Susan has toward her fellow man. Why is this a factor? Henry believes his classmate and cute girl-next-door Christina (Maddie Ziegler) is being molested by her stepfather Glenn (Dean Norris- Hank from TV’s “Breaking Bad”).

Henry’s frustration in bringing Glenn to justice and being Christina’s savior is not only compounded by his mother’s apathy, Henry is up against insanely opportune obstacles: Glenn is Cavalry’s police commissioner and Glenn’s brother is Social Services, as Henry learns the hard way after “dropping dime” on Glenn. But Henry’s ever-the-schemer and do-gooder and can’t be deterred, if only he didn’t keep having these pesky headache and blurred vision episodes. As with the best laid plans of mice and men (and Henry), a crippling seizure stops Henry’s crusade. Incapacitated with a massive brain tumor, Henry has prudently set up the means for Susan to finish the job of frying Glenn.

What I’ve just described is only the first half of “Henry” and what follows makes for a “so-bad-it’s good” endeavor. After duping you into believing it may be lighthearted (Susan’s luncheonette co-workers are SNL vets Sarah Silverman and Bobby Moynihan), “Henry” quickly drops the hammer by having its titular character saddled with a tumor and wants us to believe Henry somehow provided his mother with a step-by-step instructional via tape recording to become an assassin and that Susan would buy into it. While nothing melts my heart more than a suburban mother running across a moonlit bridge with a suppressor-modified bolt-action rifle in her hand, even I doubted “Henry” could tie up its story with anything other than mental head-scratching. I was wrong- Stevie Nicks singing the movie’s theme song over the end credits confirmed that hell enjoys its surprises.

So what have we learned? Apart from what we already knew about oil and water, Watts and Tremblay shouldn’t co-star in movies together (apart from “Henry,” they were also in 2016’s dismal psychological thriller “Shut In”). If they decide to team up again this year, I’ll tell you all about it next year before the Oscars.