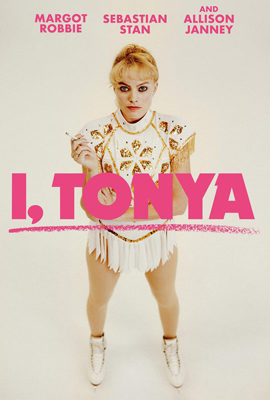 Seemingly cobbled together from the best elements of outrageously planned true-life crime films, “I, Tonya” makes the most its parts with a script that delves deeply into the character motivations at its core and uniformly sound acting that sells the scheme that toppled the rise of one of figure skating’s finest, Tonya Harding.

In 1994, at the U.S. Figure Skating Championships in Detroit, skater Nancy Kerrigan (Caitlin Carver) was attacked by an unknown assailant who struck Kerrigan’s leg with a steel baton, forcing her to withdraw from competition to select skaters for that year’s Winter Olympic team. Kerrigan’s leg was only bruised, making her eligible to be selected for the Olympic team; her assailant later identified as Shane Stant (Ricky Russert). Stant was discovered to have been hired by two men: Jeff Gillooly (Sebastian Stan) and Shawn Eckhardt (Paul Walter Hauser). The plot thickened when it was learned Gillooly and Eckhardt were the respective husband and bodyguard to the winner of the Detroit Skating Championships and fellow U.S. Olympic teammate of Kerrigan, Tonya Harding (Margot Robbie).

How these events unfolded and exactly how much Tonya knew of the plan to incapacitate Kerrigan is the focus of “I, Tonya.” The film achieves this smartly by using a two-act structure to play out the incident: the first half of the film getting to know the characters involved; the second half recreating the Kerrigan incident and its aftermath. In understanding Harding’s fight to triumph in a sport that otherwise spurned her, the film gives us a good indication of why things began to spin out of control.

Beginning in 1974, Tonya’s mother LaVona (Allison Janney) brings 3 year-old Tonya to a skating rink to be trained by Diane Rawlinson (Julianne Nicholson), who refuses Tonya because of her age. Diane acquiesces and accepts Tonya as a pupil given Tonya’s cuteness, skating ability, but mostly because of LaVona’s steel-willed determination not to accept “no” for an answer. In the decade to follow, it’s LaVona’s will combined with Tonya’s burgeoning talent that make Tonya succeed.

These factors, however, also serve as a detriment. While Tonya moves up the ranks of competitive figure skating, her self-described “white trash” upbringing in the poorer section of Portland, Oregon and wearing hand-sewn skating costumes to perform in competition begin to work against her. Skating with obvious talent, Tonya’s demeanor is her downfall. Embodying all of her mother LaVona’s moxie, Tonya profanely confronts judges at completion for not scoring her as well as she thinks she deserves. Though her talent keeps her in the running, Tonya’s told that her presentation makes her a pariah and she’s not the role model the skating committee wants to recognize.

As Tonya fights for aptitude to be rewarded over appearance, mental and physical abuse at the hands of her controlling mother LaVona segues into further abuse at the hands of Jeff Gillooly, Tonya’s husband via marrying the first boy who notices her. Gillooly’s quiet demeanor masks a quick temper and he physically punches Tonya when pushed. Though Tonya punches back and stays with Gillooly, used to the abuse from LaVona, she does reach the point of firing a shotgun at Gillooly, barely missing him….or did she? Tonya looks directly into the camera after firing and says that’s not what happened.

So, what did happen? “I, Tonya” prefaces the film with a written statement that what’s depicted is based on what’s been divulged. With an unreliable narrator adding to the mystery of Tonya’s involvement in the Kerrigan incident, “I, Tonya’s” employment of the cinematic device of actors talking directly to the audience works as well as it did in another true crime movie, Gus Van Sant’s “To Die For” with Nicole Kidman. Both films give their protagonists the opportunity to explain, and both Kidman and Robbie take full advantage of making their ambitious characters and subsequent criminal schemes plausible in their performances.

In addition to “To Die For,” you’ll be reminded of other crime films with similar story elements: the scarily violent mustached husband in Gillooly takes some of what Eric Roberts gave Paul Snider in Bob Fosse’s “Star 80” and the men enlisted to assault Kerrigan take a page from Steve Buscemi and Peter Stomare’s work in the Coen Brother’s “Fargo.” Even in “I, Tonya’s” final moments, showing Tonya Harding’s fall-from-grace, Robbie applying make-up before competition while the incident’s aftermath intensifies mirrors Glenn Close’s breakdown as she removes make-up at the end of Stephen Frears’ “Dangerous Liaisons” just as Tonya’s foray into boxing as a last grab for celebrity mirrors DeNiro’s denouement in “Raging Bull.”

There’s a lot to like in “I, Tonya.” The strong structure provided in Steven Rogers’ script and Craig Gillespie’s energetic direction, particularly in the skating sequences, support its actors well. Shaw impresses as Gillooly by quietly balancing calm and crazy, but it’s Robbie and Janney that steal the show: Janney plays tough and determined well (as evidenced in TV’s “The West Wing”), but being profanely frank and vulgar suit her as well as it did John Gielgud in “Arthur.” As for Robbie, she embraces all of Tonya Harding’s less savory character traits while demonstrating her drive to dominate. Even Robbie’s training to skate for the role plays off as her performing even the toughest skating routines, including Harding’s infamous triple Axle, seem flawless on film.

Showing what turned Tonya Harding from the revered into the reviled is what “I,Tonya” does so well. While one may question this skating queen’s involvement in a shocking scheme to succeed, there’s no doubt Robbie’s portrayal of her is as smooth as ice.

One thought on “The Ice Queen”