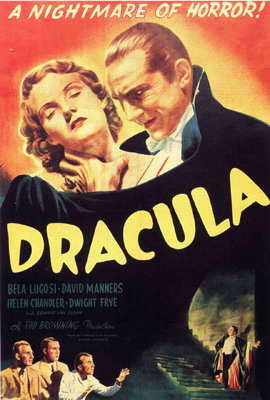 As Halloween approaches, I think back to how my love affair with movies really began.

My love of movies began with monster movies. Not horror movies, monster movies- specifically Dracula, the Wolf Man, and Frankenstein. For personal reasons, I identified with these monsters- loners who lived by night.

As a kid, I would constantly get my days and nights mixed up. As a baby, my mother thought I was great because I would sleep until 1 pm. It was only when my aunt stayed over and found me standing in the crib of my darkened bedroom that my mother realized the truth. From that moment on, my aunt began calling me ‘demon,’ a play on my middle name Damon.

Even school couldn’t quell my nocturnal habits. Every summer vacation I’d find myself staying awake until 8 am and sleeping until 4pm. I’d go outside to play when the sun was going down and stay awake all night watching television. It was in these late-night hours that I’d get together with old friends, my fellow castaways from the world of the living who found themselves (like me) on the graveyard shift. It wasn’t their choice to keep these hours just as it wasn’t mine, so we bonded.

Even in their strengths, they had their weaknesses. For Dracula, it was garlic, crucifixes and holy water- he didn’t like mirrors either, because they were a dead giveaway to his true identity. The Wolf Man didn’t like silver in any way, shape or form and full moons were a real bummer. Frankenstein had an aversion to fire, and irate townsfolk who carried pitchforks and screamed for his demise usually carried torches.

It seems strange to think that I’d learn life lessons from a vampire, a werewolf, and a man-made killing machine, but I did. Dracula had to kill to live; he didn’t choose to be a vampire but if it meant sinking his pointy incisors into some buxom blonde’s neck to add a few more days to his life, so be it. The Wolf Man had the same sort of modus operandi because it was just his nature when the full moon came out, but when the moon waned and the wolfsbane stopped blooming, he took human form again and felt really bad about what he had done. As for Frankenstein, he never asked to be here- that was all Dr. Victor Frankenstein’s idea. If the people around him went after him because he was different, he’d have to defend himself wouldn’t he? A strangulation here, a crushing body blow there, and pretty soon everybody gives you some space.

But any peace my pals found wouldn’t last long. Eventually, the world around them would find a way to get rid of them. A stake would find a way into Dracula’s heart just as a silver bullet would eventually enter the Wolf Man’s body. Frankenstein would wind up being buried alive or burned in a collapsing fire-engulfed building. And in their cinematic ends, the life lessons they were teaching me would also end- but only temporarily. You see, the best thing about my friends was that they’d be back; they wouldn’t let me wile away the wee small hours of the morning alone for very long and when they returned, they’d continue to impart their life lessons to me.

The greatest life lesson that each of these monsters taught me was that you can’t keep a good man down. Their individual life lessons also carried weight: Dracula taught me that fighting for survival using unorthodox ways was sometimes the way it had to be; the Wolf Man’s regrets over his reprehensible actions made me mindful of my own actions and Frankenstein showed me that you should never be around those who dislike you because you don’t look like they do- surround yourself with those who love you for who you really are.

So this Halloween, I’ll surround myself with loved ones- my childhood friends that I love because I know who they really are. They may be monsters to you, but they kept me company when I was alone in the dark and I’ve never forgotten them for that. I’m grateful for all the time I shared with them and everything they taught me but most of all, I’m grateful knowing they’ll always be there for me. In the promise of an eternal life in the movies, they’ll never go away.

My monsters come back to me in the same way the best things in life come back; the things you love never leave if you treat them right. Dracula, the Wolf Man, and Frankenstein’s return remind me of this and also of who I really am, even if I sometimes forget myself.

Their periodic return usually comes around Halloween. It’s because of this that I know why a jack o’lantern smiles.

One thought on “Monsters: A Love Story”