JLaw in the House 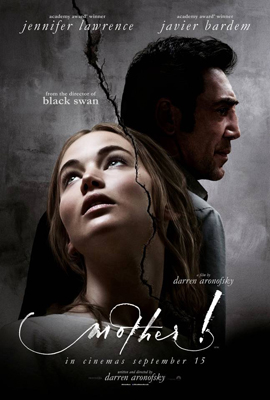 You’ll be of one of two minds after viewing “Mother!” and see it either as a pretentious puzzle or a paranoid parable. While it’s a seemingly ‘love it or leave it’ proposition, director Darren Aronofsky (“Black Swan,” “The Wrestler”) fills the film with such an unflinching and unconventionally original approach in laying out the clues to his dark mystery that it should sway you toward the latter opinion. Either way, watching Jennifer Lawrence strap herself in as the focal point in Aronofsky’s emotional roller coaster is worth the ride.

The opening scenes of “Mother!” set the tone for the trippy twists to follow and, as Aronofsky has cinematically translated what he describes as his own ‘fever dream,’ the characters exist without proper surnames: a fire has consumed the house of a celebrated poet (Javier Bardem) and, when the poet picks up a crystal with a burning ember inside from the ashes, we see the charred rooms of his home transform into a newly-conditioned pristine interior. Is it magic or symbolically what his much younger wife (Jennifer Lawrence) means to him- his wife as the ‘jewel’ that has beautifully restored their house to allow them a fresh start. While she putters around the home splashing fresh paint on the walls, he tries to write but finds he’s got ‘writer’s block.’ Though their beautiful house is isolated within a lavish meadow in the middle of nowhere, a knock on the door one evening disrupts their tranquility- a surgeon (Ed Harris) has confused their home with a bed-and-breakfast where he can privately write his research papers.

Much to his wife’s surprise, the poet offers the surgeon a room in their house to spend the night. While taken aback by her husband allowing a stranger to stay overnight in their home, she is more baffled when the surgeon’s wife appears (Michelle Pfeiffer) the next morning and the poet allows them both to stay. Although the poet’s wife asks the surgeon not to smoke in the house and tells the surgeon’s wife not enter the poet’s study, she soon finds the two strangers disregard her wishes. Upon visiting their room to confront the strangers and finding it empty, the wife notices a picture of her poet husband in their bag. Does the poet secretly know them?

What we learn in “Mother!” is solely through the character of the poet’s wife (Lawrence) – all of Aronofsky’s clues as to what’s going on come through her. In one of the film’s most pivotal scenes, a conversation between Lawrence and Michelle Pfeiffer (whose acting is spot-on as the very forward, no-nonsense surgeon’s wife), Pfeiffer asks Lawrence all of the rational questions we would ask- if fire totally destroyed the house, why didn’t they rebuild a new house on a stronger foundation instead of trying to restore the old one? In learning Lawrence secretly wants children, why would the poet marry her and not get her pregnant? Lawrence’s reaction as to why she has invested her time and energy in remodeling a burned-out home and why she is not yet a mother allow for the mysteries in “Mother!” to begin to unravel.

All is slowly revealed in Aronofsky’s surreptitious screenplay, but it’s Lawrence who sells it. As the acting center of Aronofsky’s universe, we’re always by her side and see everything she sees. Lawrence’s emotional reactions are what rivet us; her discoveries are ours. With spooky script developments ranging from blood seeping out of a spot in a hardwood floor to becoming involved in an all-out war between a cannibalistic mob and police officers in full riot gear within the confines of her home, Lawrence isn’t given an easy role. But it’s the strength Lawrence has always managed to draw from in her acting that makes her performance a winner. In using fortitude to overcome the obstacles Aronofsky sets in her path, Lawrence deftly navigates the turns in his treatise (and “Mother!” is a cinematic treatise- on the budding of and blowback from ‘creation’).

To understand the interesting visuals and subtle metaphors Aronofsky creates that give meaning to the film’s superficial strangeness, we needed to be alongside an actress like Lawrence to experience “Mother!” through her. While another actress might have overplayed the ‘damsel in distress’ angle or not been convincing in trying to survive the story’s ensuing mayhem, Lawrence makes the journey worth it. Whatever you may make of “Mother!” as a movie, you’ll be thankful Aronofsky put ‘JLaw in the house’.