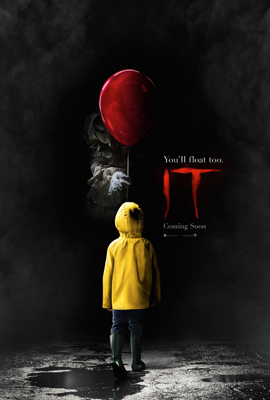 Thanks to a smart screenplay that manages to capture the spirit of Stephen King’s 1986 novel and plays to the cinematic strengths of director Andy Muschietti, “It” is one of the best film adaptations of King’s work and easily one of the best horror movies to come around in a while.

If you didn’t find the time in the past 31 years to pick up a copy of “It,” King’s 1,138 page literary opus, fear not- while Muschietti’s “It” isn’t the whole story that King told, it’s a tight package focusing on one of the two time periods described in the book. “It” is the story of seven people who band together to fight a centuries-old evil that lives beneath their hometown of Derry, ME and pops up to the surface every 27 years to feed on people (mainly children) to sustain itself: these seven people first encounter the evil when they are thirteen years-old, then return to Derry to fight ‘It’ again as adults when they are aged forty- Muschietti’s film focuses on just this earlier time period and how this group of thirteen year-olds initially forms to fight ‘It.’

During an October rainstorm, Bill Denbrough (Jaeden Lieberher) makes a paper boat for his six year-old younger brother, George (Jackson Robert Scott) to sail through the streets of Derry while Bill’s sick in bed. Unable to accompany “Georgie” while he plays in the rain sailing his ship, George isn’t alone for long: he meets a new friend when his boat careens into a storm drain- inside the storm drain is ‘It’ in the form of a clown named Pennywise (Bill Skarsgard), who manages to save George’s boat. Preying on George’s innocence and inquisitive nature (clowns in a storm drain are more of an interest than an inhibitor to a child), Pennywise soon makes his evil intentions evident by violently getting George into that storm drain too.

With a neighbor witnessing George reaching into the storm drain before his disappearance, Bill spends the next eight months trying to figure out where George could have wound up or been flushed out and find him while everyone else has simply given up the search. Enter Ben (Jeremy Ray Taylor), the overweight newly-friendless new-kid-in-town who spends his after-school hours perusing through books of Derry’s history at the local library. He soon finds a friend in Beverly (Sophia Lillis, whose acting stands out in the groups’ toughest role), with whom Ben shares a class and develops a crush, and, after a run-in with local bully Henry Bowers (Nicholas Hamilton), meets Bill and his other friends Richie (Finn Wolfhard), Eddie (Jack Dylan Grazer) and Stanley (Wyatt Oleff) while they’re searching one of the drainage pipes for evidence of George. They do find evidence- though not of George, it’s a sneaker inscribed with name of another in a growing number of missing children in Derry. With Bill’s determination to find his brother, Ben’s knowledge of Derry’s history and another boy named Mike (Chosen Jacobs), who joins the group after fleeing Bowers’ gang as Ben did, the odd events that cyclically claim the lives or leave multiple children missing and their connection to the drainage system that runs beneath Derry soon bring the seven kids to the center of what evil lies in the heart of their town- ‘It.’

If you’re only connection to Stephen King’s stories are though movies, consider “It” to be “Stand by Me” meets “The Shining.” However, what makes Muschietti’s “It” really work is a screenplay that focuses more on the “Stand by Me” element than the obvious temptation to ‘send in the clown,’ i.e. Pennywise, the killer clown, at every opportune moment while making the kids merely victims. I find the scariest movies to be when evil intrudes on the everyday: in giving the kids enough background through realistic dialogue and scenarios, we learn to care about them; by not forcing them into cookie-cutter characters with phobias to serve as fodder for Pennywise to be summoned to scare, we’re surprised when ‘It’ appears. These strengths in the script serve director Muschietti well: if you’ve seen his directorial debut with 2008’s “Mama,” the Jessica Chastain-starring, Guillermo Del Toro-produced spook story of two young girls raised in a cabin in the woods by a gaseous ghost, you know he can direct children well and bring out the most in their acting through emotions. Muschietti can also fill a frame with layers of fright- while something happens in the foreground or side of a shot, Muschietti finds a way to stage another scare in the background or other side of the frame- both of these directorial strengths are showcased in “It” and make him the perfect director for the film.

While another “It” film is sure to come to theaters at some future date to complete King’s chronicle, here’s hoping the same crew involved with this film returns as well- they got ‘It’ right.