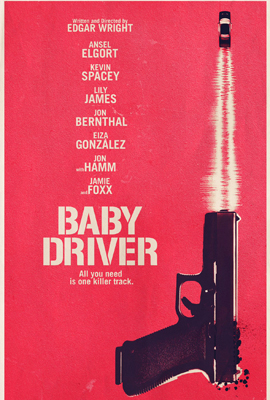 When all of its pistons are firing, a good movie’s like a clean engine: “Baby Driver” has all of its pistons firing with a well-written caper story, a great cast with interesting characters to play, and a director who uses a finely-tuned style and sharply-edited action scenes to showcase his talent. By following the rules of an engaging crime drama, writer/director Edgar Wright smartly puts his own artistic spin on the familiar and makes “Baby Driver” a refreshing robbery saga set to an eclectic soundtrack that makes for a smooth ride.

“Baby Driver’s” the kind of heist movie where everyone uses an alias: Baby (Ansel Elgort) is a 20-something getaway driver who works “smash-and-grab” jobs orchestrated by Doc (Kevin Spacey). Baby’s not a getaway driver by choice: Baby had the misfortune of trying to steal Doc’s car and quickly found himself under Doc’s thumb. Rather than killing Baby, Doc, impressed by Baby’s moxie and skill, makes Baby drive for him as repayment for the theft. While Doc assembles different crews to get a cut of any crime he’s planned, Baby is Doc’s permanently-planted driver. After each job, Doc gives Baby a little taste of the haul to keep him going financially until they’re straight- once Doc’s satisfied that Baby’s repaid him, Doc will set Baby free.

Baby’s a unique character: orphaned as a child and scarred from being in the back seat of the car accident that took his parents’ lives, he also has tinnitus (a persistent ringing in his ears) as a result of the accident and constantly listens to an iPod to drown out the din. However, listening to music doesn’t impair Baby’s work: he’s the best getaway driver around and director Wright shows this with expertly-edited action scenes. The soundtrack to these scenes is set to the different songs playing in Baby’s ear buds, and that’s where Wright shows his talent: whether in car chases or shootouts, the music’s always present and syncopated to the scenes. It’s a clever gimmick that Wright uses sparingly, thus allowing them to shine.

Of course, with any good crime drama, once Baby thinks he’s straight with Doc, Doc shows there’s no such thing as straight with crooked people: Doc needs Baby to drive- it’s a “do or die” situation for Baby, do more jobs for Doc or the people Baby loves will die. Baby does have people he loves: a deaf and invalid foster father, Joseph (CJ Jones) and a waitress at the diner he frequents, Debora (Lily James). When their safety becomes threatened, Baby has to find a way out by using more moxie and skill than Doc could have imagined.

As a director, Wright proves he’s got skills and style, notably in scenes where bullets fire to the beat of any song that’s playing on the soundtrack (artists ranging from Sam & Dave to the Commodores), but it’s really his screenplay that seals the deal: “Baby Driver’s” strength is its story. Wright never lets us forget Baby’s still dealing with bad people- despite the fun of watching action set to the soundtrack’s percussion, he’s unflinching in showing the film’s characters’ actions have bad repercussions. By not shirking from showing Doc and his caper crews as bad apples that are rotten to the core, Wright realistically assembles an entertaining rogues’ gallery (featuring an itchy trigger-fingered Bats (Jamie Foxx), Buddy and Darling (Jon Hamm and Eiza Gonzalez) as a modern-day psychopathic Bonnie-and Clyde, and even the manipulative mastermind of Doc himself give Spacey and the entire supporting cast roles to sink their teeth into). In fact, “Baby Driver” is a uniformly well-cast film with a star that’s a standout: Ansel Elgort conveys all of the stoic and heroic qualities in Baby and shows he can carry a movie.

Not forgetting style needs substance, Edgar Wright has written and directed a fun, heist thriller by being smart enough to know savvy directing skills need to take a backseat when a slick story should dictate the speed. Letting cleverly choreographed chaos accentuate the film’s literary larceny, Wright avoids the crash-and-burn of the ordinary- “Baby Driver’s” a movie machine that runs clean by never letting you forget it’s really mean.