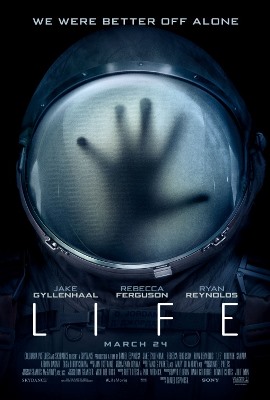 “Life” is a creature-feature that’s entirely watchable, thanks to effective CGI effects and a script that follows a foolproof recipe. While the film may have all the depth of a long “Twilight Zone” episode and thumb its nose at conventional science, it does serve its primary purpose: introduce a cool-looking monster and watch it systematically kill off people to survive.
You know the recipe: 1) Thaw frozen creature; 2) Get creature back on its feet; 3) Make sure your own feet can run from said startled creature; 4) Add slaughter. The whole thawing recipe thing may be most famously remembered from Howard Hawks’ 1951 film “The Thing from Another World” (later remade by John Carpenter with 1982’s “The Thing”), but Frankenstein got frozen as early as 1943 in “Frankenstein Meets The Wolf Man” and Dracula was encased in ice at the beginning of 1968’s “Dracula Has Risen From the Grave” so, with all due respect to Walt Disney and Ted Williams, monsters have a time-honored tradition of putting the ‘cry’ in cryogenics.
And so with “Life,” “Deadpool” scribes Rhett Reese and Paul Wernick take us into the frozen frontier of outer space to watch the six-man crew of an International Space Station collect some samples from planet Mars and, within these samples, find a squiggly, cellular organism that proves the existence of life there. Everyone on board the space station is happy to relay the good news to Earth, proving their floating in space hasn’t been a colossal waste of time and money. Kids on Earth are excited too, cutely nicknaming Mars’ myocyte. neuron and photoreceptor-filled organism “Calvin.” What do all those cellular terms mean in layman’s terms? Quarantine Officer Miranda North (Rebecca Ferguson) explains that “Calvin” is “all muscle, all brain, and all eye” (oh, my).
And “oh, my” is exactly what the space station’s crew exclaims when a lab accident causes “Calvin” to become comatose: enter engineer Rory (Ryan Reynolds) to diffuse the problem and biologist Hugh (Ariyon Bakare) to get “Calvin” copacetic again. Once “Calvin” gets his sea-legs back, we see “Calvin” fight to free himself from his containment. With CGI effects and a plot that allows “Calvin” to escape from the lab, “Calvin” begins to evolve: at first, it looks like a nimble Shrinky-Dink; later, it grows to become an almost-transparent, free-floating space squid. How does “Calvin” grow? Without having ‘silver bells and cockleshells’ to feed on in deep space, “Calvin” has to make do with good old-fashioned ‘crew stew-’ by the way, Jake Gyllenhaal’s in this movie; he plays David, a medical officer who works to contain “Calvin” before it consumes any(more) of his colleagues, including the space station’s pilot (Hiroyuki Sanada) and commander (Olga Dihovichnaya).
Why do I mention star Gyllenhaal’s role offhandedly? Because he’s not the star of “Life,” “Calvin” is. In a creature reminiscent of a translucent “Little Shop of Horrors” Audrey II (who also grows by gorging itself), the crew member characters in “Life” are aboard solely to be “Calvin’s” smorgasbord. Don’t look for any deep character development as the crew members scramble around the space station to put an end to “Calvin’s” rampage, their only purpose is to be the prospective slaughtered- it’s that simple.
And that’s what I enjoyed most about “Life:” its simplicity. So what if director Daniel Espinoza uses visual effects (in creature “Calvin” and its space station setting) to make me forget the scientific figuring of how breaches in a spacecraft’s hull wouldn’t kill spacesuit-lacking crew members hanging on for dear life against volatile vacuum forces consisting of bone-shattering cold and non-existent oxygen – I’m there to see cosmic carnage and, as simple sci-fi horror goes, the movie delivers.
Steeped in the rich movie tradition that allows monsters to melt within scenarios impervious to serious thought, “Life” satisfies. If creature-features are only as entertaining as the creatures they feature, “Life’s” “Calvin” is a keeper.