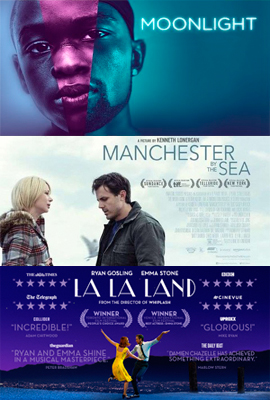 With the Oscars being presented on Sunday, Feb. 26th, I like to focus on the films and performances that I found the most memorable. In keeping with the tradition of the late Siskel & Ebert’s “If we picked the Oscars,” here are my standouts for 2016 using the nominees in the main Academy Award categories. While others may try to second-guess Oscar politics with who ‘should win’ or ‘will win,’ I like to keep it simple. In case you missed any of them, these are the films and performances that I’ll remember most- simply put, these are the ones:

Raw and emotional, “Moonlight’s” a tough pill to swallow. Yet, Barry Jenkins’ adaptation of Tarell Alvin McCraney’s play “In Moonlight Black Boys Look Blue” gives an unflinching honesty to the coming-of-age story of a fatherless young boy named Chiron growing up in a seedy, drug-infested Miami neighborhood. In becoming the man he sees himself to be within the confines of what he knows, Chiron’s early influences are Paula, his emotionally abusive drug-addicted mother (Harris) and Juan, the drug dealer with a heart-of-gold (Ali) who befriends him.

Paula and Juan’s influences directly affect Chiron’s future, therefore the strength that makes you care about Chiron’s plight in “Moonlight” is in its backbone, namely Harris’ and Ali’s performances. Harris, unrecognizable without make-up and her British accent, provides both the toughness of a single mother and the weakness of not being a better parent through her drug addiction, best displayed in an emotional confession to an adult Chiron by professing her love to a son who can’t forget and won’t easily forgive; Ali, who befriends young Chiron, imparts all the good worldly advice he can yet, confronted by Chiron’s question of whether he’s a drug dealer, is stunned to silence, knowing he’s helped cause Chiron’s mother’s detachment.

If anything solidifies the strength of their supporting roles, it’s the Catch-22 confrontation between Juan (Ali) and Paula (Harris): Juan, catching Paula freebasing, chastises her parenting while Paula angrily scorns Juan for being her supplier- in short, these two actors lay the groundwork for the gravity in “Moonlight.”

For sheer efficiency of structure, Sheridan’s screenplay impresses by giving a generic caper story the depth of character development that moves beyond stereotype.

Set in West Texas, two brothers (Chris Pine and Ben Foster) go on a bank branch robbing spree to pay off the mortgage on their family’s ranch and Sheridan builds a believable bond between the brothers, making them reasonable and realistic Robin Hoods in the present-day plight of honest, hard-working Americans. Add to this a fully-fleshed out community complete with colorful supporting characters, including a Texas-raised U.S. Marshall (Jeff Bridges) who seems to know the brothers better than they know themselves, and you’ve got an atmosphere that envelops you. Sleek and smart, “Hell or High Water’s” screenplay is complimented by richly-drawn characters that make it seem like they’re the ones creating the plot and not the other way around.

While writer/director Kenneth Lonergan serves up the softball that makes us identify with the inner turmoil infecting Lee (Affleck) upon his return to the town of Manchester by the Sea, Massachusetts where an unspeakable tragedy forced Lee’s flight years before, it’s Affleck’s performance that knocks it out of the park.

With an economy of words and haunted appearance, Affleck effectively conveys the hidden emotions that are weighing Lee down. As a man struggling to cope with an irreconcilable sin, Lee’s old wounds begin to reopen when faced with the prospect of becoming his nephew’s (Lucas Hedges) guardian and Lee’s forced to revisit the past he’d thought he’d escaped.

Whether in sudden outbursts or flashbacks that depict grief and despair, Affleck gives voice to Lee’s unspeakable pain. When confronted by his understanding ex-wife (Michelle Williams), Affleck gives a wrenching portrait of restraint while suffering. I don’t know many actors who could completely realize the depth in such a reserved role, but Affleck does it memorably.

The task of revisiting and recreating the style of the Hollywood musicals from the ‘40s and ‘50’s while giving them a modern feel should have been a disaster, but Damien Chazelle succeeded with a painstaking eye for detail. In set decoration, precisely choreographed camerawork, and actors delivering spot-on dance routines, Chazelle’s directorial skill in putting it all together was unequalled.

Chazelle’s staging aside, “La La Land’s” story of a romance between aspiring artists wouldn’t have worked without the likability of its central star-crossed lovers: Emma Stone and Ryan Gosling fit the bill. With their charismatic chemistry, Stone and Gosling admirably tackled song-and dance numbers without appearing too polished or embarrassingly ordinary, made you buy them as a couple, and had you root for them as they displayed talents I’m sure were outside of each of their comfort zones. Yet while both pulled it off, it was Stone’s acapella singing of the song “Audition (The Fools Who Dream)” that made her the film’s standout. In symbolizing the film’s striving artist’s heart, Stone became the poster child for what “La La Land” exemplified- passion beyond plausibility.

Enjoy this year’s Oscars and in discovering the future Oscar winners of 2017.