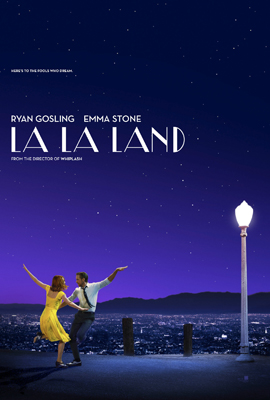 Despite any reservations you may have about movie musicals (like me), “La La Land” wins you over with star power and style to spare.

I’m not a musical guy per se- too much pep, characters who break into song to express some self-important emotion- and “La La Land” does start off that way: an opening dance number on a Los Angeles freeway that’s designed as a “meet cute” for its leads Sebastian (Ryan Gosling), an aspiring jazz pianist, and Mia (Emma Stone), an aspiring actress, to first see each other- while well-choreographed, it has all the pep and posturing of a Pepsi commercial. Then, in a subsequent musical number, Mia is coaxed by her roommates to go out with them for the evening through an equally peppy song-and-dance number. But all that peppy tone starts to change and we get into the traditional story of the star-crossed showbiz types we’ve been accustomed to seeing in movie musicals like “A Star is Born” and “New York, New York” and that’s where “La La Land” begins to shine.

It’s a familiar story: artists in love who push each another to succeed only to find success threatening their romance. However, the strength of swallowing this “seen-it-before” scenario lies in its stars and Emma Stone and Ryan Gosling make a great movie couple. In their third on-screen pairing (after “Crazy Stupid Love” and “Gangster Squad”), they’ve never carried a movie together as leads but, with their turns as Sebastian and Mia, we see why they should: Stone’s flippant fun compliments Gosling’s bemused bravado. As aspiring artists with flippant and bravado in their characters’ DNA, they get the most out of their roles. Watching Stone and Gosling together gives “La La Land” a firm, fun foundation.

Star power aside, there’s a theme in “La La Land” that lends itself to the style director Damien Chazelle (“Whiplash”) uses to great effect. Just as Sebastian laments that the traditions that built the art form he loves are dying through lack of modern appreciation (exemplified by a legendary jazz club becoming a tapas restaurant), Chazelle uses “La La Land” to serve as an appreciative modern example of the old-fashioned Hollywood musical. With stylish sets and costumes, slick camera movements and solid staging of complicated choreography, Chazelle impressively brings back the feel of those Hollywood musicals of the ‘50s and ‘60s. If imitation’s the best form of flattery, “La La Land’s” homage to the golden age of the movie musical is worth its weight in gold.

And gold is probably what “La La Land” will be seeing come Oscar time: Hollywood loves itself and, if they can applaud the recreation of silent films by awarding a Best Picture Oscar to 2011’s “The Artist,” “La La Land” seems a shoo-in to get the same recognition for resurrecting the Hollywood musical with a modern twist.

Is “La La Land” the best film of 2016? It’s one of them, but proclaiming it the best would seem flippant and full of bravado. I’ll leave that to the artists who give each other awards.

One thought on “Tra La-La”