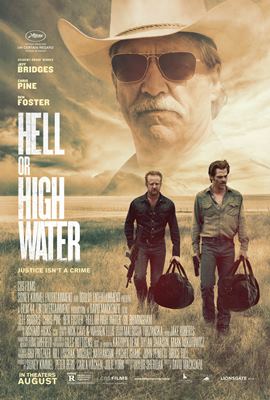 Set in the desert towns of West Texas, “Hell or High Water” is a bank heist movie that blooms like a cactus flower: colorful in its characters, organic in its plot progression, and beautiful despite its prickly environment. Like its locale with its undercurrent of “black gold,” its caper is just as sleek and slick. “Hell or High Water” is a film so complete that I don’t think I’ll see a better one this year.

“Hell or High Water” opens with a bank robbery. Two brothers, Tanner and Toby Howard (Ben Foster and Chris Pine) drive to a local Texas Midland bank branch shortly after 8 a.m.; the town’s deserted streets reflect the recession. Clad in baggy clothes and makeshift ski masks, Tanner and Toby patiently await the bank manager’s arrival. Tanner (Foster), just released from prison, is helping his brother Toby (Pine) collect the $46,000 needed to save the family ranch- Texas Midland will acquire the ranch in a few days for recently-unemployed Toby’s non-payment of reverse mortgage fees. Their plan is simple: hit a few of the local Texas Midland branches early before customers arrive, collect no bills over $20 that can be traced, launder the money at an Indian reservation casino, and use a few different and disposable getaway vehicles. With Tanner’s expertise and street smarts, Toby gets some of the money he needs from their first bank job. After a few more successful early-morning raids, they begin to get closer to their goal.

Without a bigger bank’s sophisticated surveillance or a major city’s formidable police force, the only real obstacle for the Howard boys is U.S. marshal Marcus Hamilton (Jeff Bridges). Days away from retirement, Marcus is an old pro and local Texan himself. Investigating the robberies, he’s quick to assess the Howard boys: they’re smart in grabbing untraceable low-denominational bills; their haul dictates they’re after a certain amount of cash. Marcus is also wise to the robbery pattern involving Texas Midland- this is personal. Following his hunch, Marcus and his partner Alberto (Gil Birmingham) lie in wait near a local Texas Midland bank branch for the Howard boys to appear.

Time may be a pressing factor, but not in “Hell’s” locale of West Texas. The lack of people milling around in the morning as the Howard boys perform their stick-ups may define the slow pace of the South, but speaks more to the lagging American economy. Seemingly removed from a quick response-time by the earliness of the hour, the robberies are also aided by the lack of social media and cell phones- they’re not a factor when no one’s around. Waiting is the real game in “Hell or High Water” and the film benefits from it; we’re allowed to know more about its characters without the rush of a quick-tempo cat-and-mouse chase.

Each scene of the film brims with colorful characters- people who still believe in the American dream even though America has seemed to have forgotten them. Their qualities range from fiercely loyal to family (as evident in the Howard boys’ escapade) to a strong sense of law and order (in bystanders brandishing firearms to impede a Howard boys’ hasty midday getaway) to an internal racism bred through local generations (Marcus is quick to poke fun at his partner Alberto, whose Native American and Mexican ancestry provides fodder for Marcus that only Marcus finds amusing). These fully-fleshed characterizations can be credited to writer Taylor Sheridan, whose similar talent in crime drama can also be seen in last year’s “Sicario,” and make “Hell” a unique throwback to films where our interest lies more in people than predicament.

The casting and acting of “Hell’s” lead parts is perfect. As the Howard boys, I never doubted Ben Foster and Chris Pine could actually be brothers- similar looking enough to pull off the appearance and different enough in behavior to complement their solidarity, their scenes together display a fraternal bond that never seems forced. Foster plays Tanner with the cocky security of the bad boy who knows the angles and wants to use his skills for the one remaining good his help can offer his brother in securing the family ranch. Pine impresses as Toby, whose practical planning of the robberies and calm demeanor mask an imploding imperative to do right for his estranged sons by offering them the home security he and his brother never had. But it’s with Jeff Bridges that I really felt affected by “Hell’s” Texas setting and in the film’s slow-paced style and richness of characters.

Forty-five years ago, Bridges starred and was nominated for a supporting actor Oscar in Peter Bogdanovich’s “The Last Picture Show.” Also set in West Texas, the film depicted high schoolers coming of age while the town around them slowly died in a bad economy. Written by Larry McMurtry, “Last Picture” also featured richly-detailed characters. Bridges’ roles in “Last Picture” and “Hell” seem to bookend one another- in both films, he is forced to deal with characters whose lives are being upended: as “Last Picture’s” graduating senior Duane, what to do with his future; as “Hell’s” Marcus, how to leave behind his working past. With their similar locales and strength in their supporting casts, finding that cinematic mirror between these two films just makes Bridges’ performance in “Hell” that much more special.

They say everything grows big in Texas; my admiration for “Hell or High Water” confirms it.