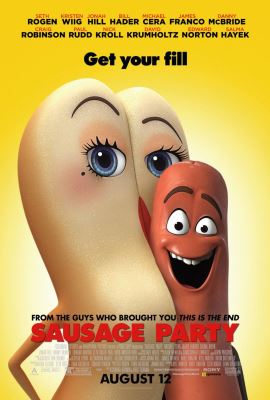 Mom said don’t play with your food; “Sausage Party” proves she was right.

After its initial set-up and the gag you know is coming- watching animated food groups panic as they realize they’re about to be eaten, “Sausage Party” inflates too much story around a funny idea. Adding subplots to make more of this central gag wears thin and backfires for writers Seth Rogen and Evan Goldberg (“Superbad,” This Is The End”); the jokes and humor of the subplots aren’t nearly as fast or nearly as funny.

Thanks to directors Greg Tiernan (TV’s “Thomas & Friends”) and Conrad Vernon (“Shrek 2,” “Monsters vs. Aliens”), “Sausage Party” has the look of the Pixar animated films it wants to parody- it even opens with a musical number. As the groceries of Shopwell’s supermarket greet the new shopping day with a happy song, the assorted foods sing of being bought (by humans/Gods) and taken to the wondrous world outside of Shopwell’s they call “the Great Beyond.” It’s here that “Sausage Party” begins to make its tone evident: moving from cute (ears of corn extolling the virtues of being purchased) to crass (Nazi-uniformed German mustard jars goose-stepping to the beat), audiences get a sense of what they’re in for.

Among the groceries, encased within their adjacent packaging, are hot dog Frank (voiced by Rogen) and his girlfriend, hot dog bun Brenda (voiced by Kristen Wiig). Frank is excited: it’s almost “Red, White & Blue” day (Fourth of July) and Frank and Brenda’s odds of being purchased together are high. Once taken together to the Great Beyond, they can be unwrapped and finally consummate their love. After being picked together and placed in the same shopping cart, the fruition of Frank’s dreams are dashed when a recently-returned honey mustard jar (voiced by Danny McBride) tries to warn the other foods in the cart about the Great Beyond- it’s not what they think. Honey Mustard, trying to escape the cart to avoid going back outside, causes a disruption leading to another shopping cart hitting theirs. Becoming dislodged from the cart, Frank and Brenda are stuck at Shopwell’s while their friends are taken to the Great Beyond. What Frank and Brenda learn in their search to get back onto the shelf are answers to questions about the Great Beyond only hinted at by Honey Mustard, and they soon wish they didn’t know.

There’s a cynical fun in putting crude dialogue and inappropriate behavior into the entertainment vehicles we loved as kids. We love the irony of watching cartoon characters or animated toys display the jaded actions we’ve experienced as adults- it’s taboo and shows how much our innocence has become tainted in the knowledge we’ve acquired since childhood. Some filmmakers get it right: Trey Parker and Matt Stone parodying cartoon musicals with 1999’s “South Park: Bigger, Longer & Uncut” or using marionettes to act out violent, deviant behavior in 2004’s “Team America: World Police;” Seth MacFarlane using a live-action teddy bear to continue to be a boy’s best friend by becoming a foul-mouthed, beer-drinking stoner buddy to the boy when he becomes a man in 2012’s “Ted.” But the jaded joy of these films is missing from “Sausage Party”- the film’s beleaguered subplots and comedic characters suffocate it.

While “Sausage Party” smartly plays its religion card with what groceries view as Heaven only to find it’s really Hell, its humor revolving around ethnicity and politics doesn’t play as well. The ethnic representation of other food characters are more in the vein of the aforementioned goose-stepping Nazi-outfitted German mustard jars and its dialogue’s one-liners are more in tune with someone saying “Okay, so?” and a jar of queso responding. The stereotypes get tired, save for the interaction between Sammy the bagel (voiced by Edward Norton doing a Woody Allen imitation) and Lavash, a Middle Eastern flatbread (voiced by David Krumholtz) representing the Israeli/Palestine conflict who agree they both like Hummus, but will never be friends.

While some characters fare well, particularly a Native American elder called Firewater (voiced by Bill Hader doing a Hunter S. Thompson impression) who clues Frank into what’s really going on as they smoke pot through a kazoo peace pipe style, the stereotypes themselves in the ethnic characters become inherently offensive. Even watching food being prepared in the Great Beyond gives you the feeling that your inner sadist has been awakened if you derive any comedic pleasure from it.

With bright spots few and far between and a joy that dissipates, a shorter film just dealing with our groceries’ voyage to the Great Beyond and the Hell of an awaiting household kitchen would have sufficed. By giving you too much tasteless stuff to chew on, “Sausage Party” doesn’t heed Mom’s advice- it gives you mild indigestion.