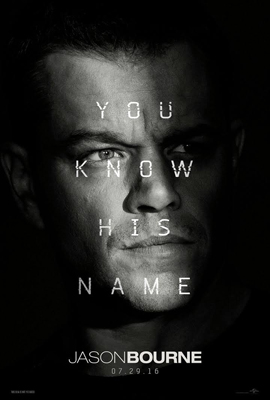 In conveying my overall feeling about a film, I’ll usually point to another movie it reminded me of so you’ll get a sense of what you’re in for should you decide to see the film yourself. With the return of director Paul Greengrass and star Matt Damon, “Jason Bourne” has all of the trappings of “Godfather III”- a serviceable sequel that, in comparison to its predecessors, comes off as formulaic and flat. However, there are enough stylish elements attached to put it a notch above the norm.

Like Pacino’s lament from “GIII,” “Just when I think I’m out, they pull me back in,” so does Jason Bourne (Damon) return after his former CIA handler Nicky Parsons (Julia Stiles) hacks into the CIA’s mainframe to acquire the agency’s dirty dealings- she downloads classified black ops files including the Treadstone program of which Bourne had been associated and reaches out to Bourne after discovering Treadstone involved Bourne’s father. Bourne, forever looking for the source of his induction into Treadstone’s secret killing cabal, joins Nicky to uncover the elusive source within the CIA that will provide the answers to the originating enigma of his assassin identity and give him the solace he’s been seeking before Nicky can publically expose the CIA’s scandalous secrets.

As with the earlier Bourne films, Bourne finds getting those answers won’t be easy after the CIA knows he’s come out of hiding: during Nicky’s hack of the mainframe, CIA Cyber Ops Division head Heather Lee (Alicia Vikander) plants a virus onto Nicky’s download so the CIA can track her movements. In tracking Nicky, CIA director Robert Dewey (Tommy Lee Jones) discovers Bourne has resurfaced and employs a black ops assassin called the Asset (Vincent Cassel) to sever the long-dangling loose end that Bourne has become after Treadstone’s demise. With the Asset in pursuit and CIA cyber-surveillance stalking Bourne and Nicky, it’s only a matter of time before the bullets start a-flyin’ and people start a-dyin.’

After our interest was piqued with Robert Ludlam’s literary character Jason Bourne in Doug Liman’s 2002 film “The Bourne Identity,” director Greengrass reinvigorated the Bourne sequels (2004’s “The Bourne Supremacy” and 2007’s “The Bourne Ultimatum”) with action scenes using up-close camera direction to put the audience right into the thick of the fight. This closeness to the chaos allowed for a closer connection to Bourne’s character. While the action scenes in “Jason Bourne” certainly have Greengrass’ flair, his style is almost a detriment- despite being well-choreographed, the big action scenes (amidst the riots of a Greek parliament uprising or a car chase down the Vegas strip) are filmed at night and make for action scenes that are visibly dark, shakily framed, and sometimes chaotic to follow. Also, and ironic for a self-titled film, there’s a lack of getting more of a glimpse into Jason Bourne’s character. With less scenes of Bourne interacting with other characters or showing him wrestling with inner demons, Damon is given less acting to do and thus provides the audience with some disconnect from the Bourne character. Apart from watching what we already know Bourne can do well (i.e.- sneak up on people in a crowd or drive cars and motorcycles with a stuntman’s skills), there’s little else we see Jason Bourne do but, as always, we still like watching Bourne battle the baddies.

As co-writer of the script, Greengrass does manage to give the story a lot of the chase and skullduggery we’ve become accustomed to in the Bourne films and does a good job of keeping the structure of what we expect from a Robert Ludlam storyline. However, since “Jason Bourne” isn’t based on a Ludlam book, it doesn’t have Ludlam’s heft or pathos. Yet Greengrass does offer some nice slippery story elements and twists, particularly involving Vikander’s character of Heather Lee. Lee, who interacts with both Bourne and Dewey and works both sides in true spy fashion, allows for us to wonder if her actions have ulterior motives- does Lee view Bourne as expendable or does she want to coerce Bourne back into the agency’s fold?

Will Bourne ever come in from the cold or will he forever be the Hercules who fights CIA’s Hydra, cutting one black ops program head away (like Treadstone) only to find it replaced with another program’s head (like “Ultimatum’s” Blackbriar or “Jason Bourne’s” Ironhand)? Will he ever stop running?

Despite any feelings to the contrary, Bourne fans are invested. As long as Greengrass and Damon are involved, they’ll want to see Bourne run.