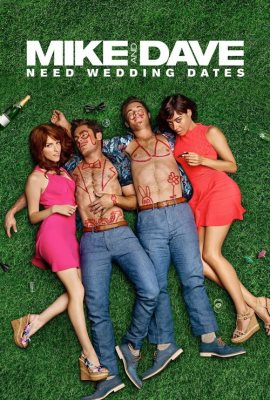 Grounded in goofiness without being grating, “Mike and Dave Need Wedding Dates” knows exactly what it’s supposed to be- a 98-minute dopey diversion that amuses with its idiocy. By throwing enough improvised one-liners at the wall to ensure that something eventually sticks and by never allowing itself to be too crude or its characters to be too deep as to be construed as real, it rolls across you like a buffoonish breeze. In short, “Mike and Dave” succeeds with its stupidity; its likeable cast makes you remember the best part about summer vacations: thinking’s optional.
With a story and characters as deep as a Daffy Duck cartoon, the film centers on Mike and Dave Stengle (Adam Devine and Zac Efron), brothers who work together as liquor salesmen and live together as roommates. At family functions, they’re as combustible as nitro and glycerin (as the opening credits showcase in slo-mo “Wedding Crashers”-style): setting off fireworks, dancing with assorted beautiful babes, frolicking on trampolines to entertain a throng of partygoers. Returning to their apartment one day, Mike and Dave encounter their parents (Stephen Root and Stephanie Faracy) and their sister Jeanie (Sugar Lyn Beard) with her fiancé Eric (Sam Richardson) who decide to give Mike and Dave a mini-intervention before Jeanie’s pending nuptials. It’s a destination wedding in Hawaii, and the Stengler family can’t afford any of Mike and Dave’s destructive antics (evidenced in their replaying of the opening credit antics with the added punch line of the aforementioned antics’ videotaped catastrophic aftermaths). The Stengler family insists that Mike and Dave not go stag to their sister’s wedding; they want Mike and Dave to bring dates to the wedding as a pre-emptive move not have the brothers go nuts at the nuptials. Mike and Dave love their sister, so they begrudgingly agree.
To get their dates for this destination wedding, Mike and Dave go viral. They even manage to get on “The Wendy Williams Show,” sparking the interest of newly-unemployed waitresses/roommates Tatiana (Aubrey Plaza) and Alice (Anna Kendrick). Having been jilted at the altar, Alice is using her free time to watch a video of being stood-up at the altar. Tatiana, tough-as-nails to make sure her friend doesn’t wallow in misery, orchestrates a plan to get Mike and Dave to choose them as their wedding dates. Finding where the Stengler brothers are interviewing prospective plus-ones, Tatiana brings Alice to accidently-meet-them-on-purpose and voila, with staged shenanigans and by presenting themselves as respectable girls, they secure themselves as Mike and Dave’s dates.
What follows in Hawaii are the usual comedic antics, but “Mike and Dave’s” cast knows their respective roles well enough to fit into the movie’s knowing numbness. Given Mike and Dave’s penchant for mischief, they are tempered by Tatiana and Alice: Tatiana and Mike are the volatile ones; Alice and Dave are the blithe ones. With the pairing’s set, it’s almost Comedy 101: the actors know their places and have fun with situations (it’s like recalling a Shakespeare comedy if Shakespeare had the shakes). They pull it off: you can tell the actors are having fun, particularly Devine and Kendrick, by pushing the envelope without tearing it or having it burn. With Ephron and Plaza as their respective straight-men, it never does.
You can’t bash a movie for knowing what it is. The fun of “Mike and Dave” is watching its actors have fun riffing with the characters they’ve been assigned. While it sometimes slows when it tries to get too crude or too soft, it admirably keeps its characters in check. As a summertime diversion, “Mike and Dave” stay true to its implied vow: don’t think, just have fun.