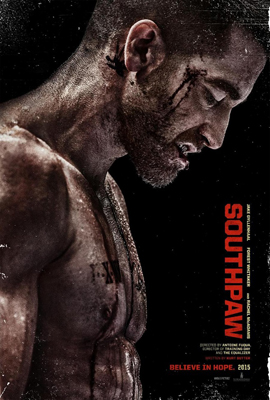 If “Southpaw” was one of those frozen blended concoctions you drink to keep cool in the dog days of summer, it would be a blended punch- it’s a film that lifts its story, scenes and characters directly from other boxing movies and only manages to stay fresh because of the juice of formidable actors who manage to keep it potent despite the familiar mix.

Jake Gyllenhaal plays Billy Hope, the undisputed and undefeated light heavyweight champion of the world. Raised in an orphanage in NYC’s Hell’s Kitchen, we meet Billy as he defends his title a few blocks away at Madison Square Garden. His loving wife, partner, fellow orphan and street-smart business confidant Mo (Rachel McAdams) supports him a few rows from ringside. Billy is the kind of fighter who the more he is hit, the harder he fights back. What concerns Mo is that Billy’s fights are lasting longer, meaning he’s getting hit more. While Billy manages to retain his title in the 10th round of this particular 12 round fight, Mo’s concern is that if this prolonged fight time trend continues, their young daughter Leila (Oona Laurence) will know her father only as a punch-drunk former champ in just a few years time.

Mo expresses her concern to Billy and insinuates that he may be losing his skill. Billy becomes upset- why can’t Mo celebrate the win and see past his battered and bruised appearance? Because the punishment is getting worse, as even young Leila notices when she counts the bruises on Billy’s face as he tucks her into bed. Mo’s concern plants the seed of impending failure in Billy that germinates with her asking him to take a break from fighting and not sign a lucrative $30 million three-fight deal designed by his promoter Jordan Mains (Curtis “50 Cent” Jackson). After speaking at a charity fundraiser to aid orphanages of which both he and Mo were products, taunts from title match-seeking boxing contender Miguel Escobar (Miguel Gomez) provoke the already-sensitive Billy into a physical altercation. The ensuing melee between their respective entourages results in gunfire and the accidental shooting and killing of Mo (here’s “Rocky III:” Clubber Lang taunts and provokes Rocky into Mickey’s subsequent death).

Without Mo, Billy begins an internal breakdown that clashes with external crumbling forces: if Billy doesn’t fight, he’ll collapse financially and so must sign the three-fight deal that Mo expressly did not want him to. His breakdown manifests itself in the first fight: Billy allows himself to be beaten by his opponent by not defending himself (here’s “Raging Bull-” LaMotta’s destructive behavior by tying his hands between the ropes, allowing Sugar Ray Robinson to pummel him). Billy assaults the referee in the process of stopping the fight and is suspended from boxing. He continues his downward spiral conducting an Escobar revenge-fueled murder/suicide attempt that leads to his arrest and, as Billy is an orphan with no family, the court sends Leila into the very state-funded childcare from which he and Mo had escaped. Billy must now literally fight to get his daughter back, the road to redemption coming in the form of gym owner Tick Wills (Forest Whitaker), a former boxer forced to quit after being blinded in his left eye. Wills reluctantly agrees to train the doggedly stubborn Billy for the chance to get back into the ring and prove to the state that he can financially support and care for his daughter (here’s “Million Dollar Baby-” Tick is an obvious hybrid of Eastwood’s gym owner and Freeman’s left-eye blinded former fighter).

Familiarity breeds contempt- without its cast as its saving grace, I probably would have disliked “Southpaw.” However, as Billy, Gyllenhaal does a solid acting job, displaying the aggression and quick-temperedness that must be at the core of most professional boxers while validating the inner wounded, abandoned child seeking to build the family he never had (Billy’s fight to regain custody of his daughter and their scenes together have the same emotional dynamic as “The Champ.”). Whitaker also manages to infuse his character with the same damaged solitude; he and Gyllenhaal expertly show the lingering physical and psychological damage professional prizefighting can cause.

But the real acting highlights for me were in McAdams as Mo and “50 Cent” as Jordan Mains. While Mo’s street-smart attitude seems cut from Melissa Leo’s cloth in “The Fighter,” McAdams death scene is on par with Robert Duvall’s in “Colors:” if you ever want to see actors express shock, confusion and resolve after having just been shot, McAdams (like Duvall) does it in master class fashion. And “50 Cent” manages to bring every nuance of a “wolf-in-sheep’s-clothing” to his character of the dapper yet devious boxing promoter Mains- in his white-polished smile and oily charm, one can imagine Mains viewing his boxers not only as meal tickets but as the meals themselves, as so many slabs of meat that once pulverized in the ring would be tender enough to eat.

Director Antoine Fuqua (“Training Day,” “The Equalizer”) and writer Kurt Sutter (“Sons of Anarchy”) give “Southpaw” a dark, dramatic tone that avoids the overly sweet or gooey concoction the film could have been. While its story is not as refreshing as you’d hoped, the actors give “Southpaw” its punch.