He said he’d be back 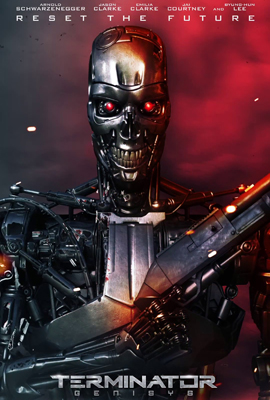 “Terminator Genisys” reminded me a lot of last month’s “Jurassic World”- take an original movie you loved, reboot it after a couple of forgettable sequels, provide it with a decent-enough story to make your experience not a complete waste of time, and then reduce all of the action to a comic book form of rock ‘em-sock ‘em robots.

On paper, I guess the synopsis actually reads worse than it is, but as summer movies go, “Genisys,” like “World,” fits your summer movie-viewing bill. However, for these reboots to hang their interest and appeal on your love of the original films, my grievance where both movies are concerned is that they replace the scares and suspense that made the originals endearing and deliver reboots that reduce your viewing pleasure to watching a baseball game where every batter gets a hit versus the suspense that the batter may actually strike out.

Is “Genisys” worth seeing? Not to answer a question with a question, but were you really counting the minutes until Arnold Schwarzenegger reprised his role as the T-800 killing machine cum guardian of the mother of the yet-unborn rebel leader out to quell the future uprising of machines hell-bent on destroying mankind? Me neither, but I went to see “Genisys” because I loved the original “Terminator” and was curious to see what they’d do in the reboot. While I wasn’t disappointed, I wasn’t wowed- “Genisys” does what it sets out to do as reboots go. Yet, in the thirty years since the original, the Terminator’s scares and suspense have deteriorated to becoming just robotic rock ‘em-sock ‘em comic book action.

“Genisys” begins as a prequel- it’s the year 2024 and the machines have taken over to wipe out mankind. Their robot army is met by Resistance soldiers, led by John Connor (Jason Clarke), who storm the machines’ headquarters Skynet to cut the head off the snake and destroy the machines once and for all. The Resistance’s plan almost works until they discover that Skynet had one last trick up its sleeve- a time machine through which they’ve sent a lone T-800 terminator unit (Schwarzenegger from the original film) to kill John’s mother, Sarah (Emilia Clarke) before she can give birth to John and the future aggravation he’d cause. John enlists Kyle Reese (Jai Courtney) to use the time machine to follow the T-800 back to 1984 and destroy it before it can kill his mommy (and, ultimately, himself).

Decent enough premise, right? It brings us right to where 1984’s film “Terminator” begins and offers some new twists. Just as the T-800 and Reese arrive in 1984, the T-800 (1984’s young Arnold) is met by a reprogrammed T-800 Model 101 (a slightly older Arnold ) and is quickly dispatched with the help of Sarah, thus wiping out everything that happened plotwise in the original “Terminator” and, in doing so, allows Kyle Reese to live. Sarah, the now-living Reese, and the 101 then walk us through the events of 1991’s “T2: Judgment Day” and battle that lovable molten-lava shapeshifting T-1000. These are all decent-enough twists that lend itself nicely to robotic blam-blam battles.

Upon learning that the machines’ Judgment Day will begin with the launch of a highly-desired new app called Genisys (an app that will link every facet of an individual person’s virtual world) designed by the Cyberdyne company, the three quickly race to destroy the Cyberdyne headquarters before the Genisys application can start and evolve Cyberdyne into Skynet. One catch: before Reese was sent back in time, he saw John Connor subdued by a Resistance soldier and we learn this soldier was Skynet’s most-advanced Terminator unit, a T-5000. When John Connor suddenly appears before the three can reach Cyberdyne, we wonder if anything came back with him- a T-3000 model, perhaps?

Again, the twists and story are decent enough for a Terminator reboot and the action is aplenty- I just miss the old fear and fright that accompanied my memories of what the original Terminator was: a killing machine that had no pity, no remorse, and absolutely would not stop until its target was dead. So is it fun to watch different model Terminators get together and battle to see who will win? While some revel in these rock ‘em-sock ‘em scenarios, I’d rather just fondly remember the originals and regard reboots like “Genisys,” that treat their source material with a modicum of decency and respect, accordingly.