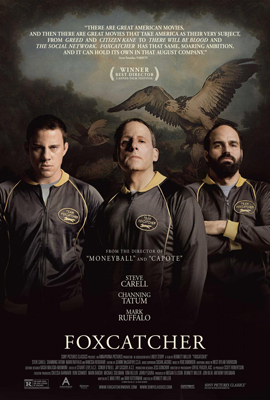 “Foxcatcher” is a haunting portrait of the events leading up to millionaire John du Pont’s 1996 murder of Olympic gold-medalist Dave Schultz at his Foxcatcher Farms wrestling training facility. As he had done in his previous films “Capote” and “Moneyball,” director Bennett Miller forgoes painting the broad strokes of the already sensational real-life stories and instead focuses on the internal motives and psyches of the characters involved. With “Capote,” we glimpsed into Truman Capote’s (Philip Seymour Hoffman) ego and manipulation of the killers of the Clutter family to write his book “In Cold Blood”; in “Moneyball,” we watched Oakland A’s general manager Billy Beane’s (Brad Pitt) personal vendetta fuel his fire to buck major league baseball’s scouting system to revolutionize the process of picking a winning team. With “Foxcatcher,” Miller once again highlights the psychological aspects and internal motivations behind the characters of the story to great effect and “Foxcatcher” feels like a natural progression for Miller as its story combines two environments in which we’ve already seen him excel- sports and murder.

The story of “Foxcatcher” centers on Mark Schultz (Channing Tatum), a wrestler who won an Olympic gold medal three years earlier and now finds himself trying to return to the Olympic spotlight the following year at the 1988 games in Seoul, Korea. Mark’s chances look dim- he leads a meager, solitary existence; his time used only to train for a chance to return to Olympic glory. Helping him train is his brother, Dave (Mark Ruffalo), also a gold medalist from the 1984 Olympics and now a wrestling coach at a university. One day, Mark receives a phone call from a man representing John du Pont “of the du Pont family” (as if this connection to one of the world’s wealthiest families will ring a bell with Mark, which it doesn’t) who wishes to meet the Olympic wrestling medalist. Upon agreement, first-class travel arrangements will be made for Mark to meet du Pont. The ego strokes work and Mark complies, whisked away on a helicopter to du Pont’s residence, Foxcatcher Farms.

In John du Pont (Steve Carell), we see a pale, sheltered man who imparts his vision to Mark: just as the Russians fund money to train their wrestlers, du Pont wants to bring that honor to American wrestlers by being their benefactor and have them train at a facility that he has built on his estate. His end game is the same as Mark’s- to win the gold at the next Olympics. John offers Mark a salary, lodging, and the opportunity to join du Pont’s team Foxcatcher. Mark accepts and tells his brother Dave the good news. Dave agrees it’s a great opportunity for Mark but asks Mark to tell him what du Pont gets out of this. When Mark cannot answer, we sense a mystery and dread that this orchestrated quest for Olympic gold may just be a metaphoric gold and honey trap.

This question of du Pont’s reasoning for creating the training facility and his seduction of Mark by dangling a future gold medal in front of him is what drives the drama of “Foxcatcher.” Knowing the tragic outcome, we begin to see the unraveling of John and Mark’s psyches once Mark joins team Foxcatcher. In du Pont, Carell shows a man who has been isolated by wealth, whose personal connections to people have been acquired through the money he’s given them to retain their company and serve his wishes, and whose pale complexion and flatly-toned voice are the effects of living in the shadow of his mother (Vanessa Redgrave), who lives with du Pont at the estate. While his mother disapproves of wrestling as a competitive sport (calling it “low”), John puts his energy into proving her wrong in a bid to gain her admiration.

John du Pont’s childlike qualities go beyond seeking his mother’s approval. In speaking with Mark, John insists that Mark not address him as “Mr. du Pont” or “Sir,” but instead “Eagle” or “Golden Eagle” (a nod to his family’s patriotic past and his love of ornithology). In gauging Mark’s bewildered look, John recants, asking instead to be called “John” or “Coach.” These moments of du Pont’s eccentricity and childlike candor are well done by Carell; we’ve seen him use them to great advantage in films like “The 40 Year-Old Virgin” and “Anchorman.” But it’s really John’s dark seduction of Mark where Carell grabs your attention. When John begins to undermine Mark’s training by slowly getting him to indulge in drugs and alcohol, or writing a speech for Mark to introduce him at an awards function by having Mark call him not only a mentor but father figure, we see the extent of du Pont’s manipulation. The effects of this manipulation on Mark are strongly conveyed by Tatum, who easily gives his best performance to date.

Showing the manipulation and motives leading to du Pont’s downfall is what director Miller does well. After Dave Schultz joins team Foxcatcher, John’s attention shifts from Mark to Dave, prompting Mark to leave. Combined with Mother du Pont’s death, John begins to unravel and Miller provides the mechanics that lead to Dave’s murder. Without Miller’s direction and E. Max Frye and Dan Futterman’s script (Futterman wrote “Capote”), this sensational crime may have been exploitive, but Miller really strips down the story to become an examination of the lives of two sheltered men- men who’ve lived in the shadows and hope for acknowledgement and approval: John in seeking his mother’s approval; Mark in the approval of his brother, Dave. While John uses his wealth as the gold that will bring him that adoration, Mark seeks the gold of Olympic achievement to prove his worth.

While the film’s story shows us that “all that glitters is not gold,” the solid script, Cannes film festival-winning direction, and Gotham award-winning performances by Carell, Tatum, and Ruffalo should provide “Foxcatcher” with enough glitter to attract the attention of another form of gold- Oscar.