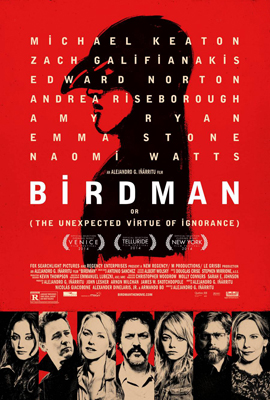 Alejandro Gonzalez Inarritu is a director I’ve admired since seeing his first feature film “Amores Perros,” a film that showed the interwoven stories of three different people linked to one event through vignettes and flashbacks. His subsequent features “21 Grams” and “Babel” also employed the interwoven story theme and followed a natural progression in Inarritu’s cinematic exploration of life’s external facets and how everything’s connected. In 2010, he internalized this theme with his study of the connection between the spiritual and physical worlds in his fourth feature “Biutiful,” an introspective character study of a black market labor exploiter with a psychic ability who must examine his life when he finds that he is terminally ill and follows his quest to secure a guardian for his children. Each of Inarritu’s first four features was nominated for Academy Awards: “Amores Perros” for best foreign film, “21 Grams” for Best Actress (Naomi Watts) and Supporting Actor (Benecio DelToro), “Babel” for Best Picture, Supporting Actress (Rinko Kikuchi), Original Screenplay and Director (Inarritu), and “Biutiful” for Best Actor (Javier Bardem). Inarritu’s fifth feature “Birdman or (The Unexpected Virtue of Ignorance)” will not be an exception.

For Inarritu, everything is connected-so it only seems fitting that “Birdman” should once again examine life’s interconnected facets. Like “Biutiful,” “Birdman” internalizes this examination as we see these connections through the mind of an actor, Riggan Thomson (Michael Keaton). For Riggan, who uses creativity and imagination as his livelihood, the connections begin to blur between the imagined and the real. If your reality was spent creating illusion, wouldn’t there come a moment when these lines could eventually blur? Wouldn’t your mind, so accustomed to generating illusion, begin to force that fanciful creation into your reality and use it as a creative mental crutch when the pressures of the world became too painful?

That’s the problem Riggan faces in “Birdman.” As a movie star who walked away from a lucrative film career (playing the aforementioned superhero Birdman) staging a comeback by producing and starring in a Broadway play he’s written, Riggan must wrestle with his inner voice- a booming voice that tells him he’s making a big mistake and should go back to being Birdman. Despite (or in spite of) the fact that the voice inside his head sounds a lot like Birdman, Riggan perceives this voice as the voice of truth. When calamities begin to befall his play’s preparation for previews, this booming voice only gets louder and Riggan can’t help but listen.

The pressures mount for Riggan in his attempt to validate his star status with a theatrical turn to combat his cinematic celebrity. While his Broadway production faces a setback with a lead actor being injured onstage, he must put aside thoughts of this actor’s pending lawsuit while he deals with the actor’s replacement, Mike Shiner (Edward Norton) – Shiner being the type of arrogant, egotistical actor who threatens to sabotage the play with outbursts onstage while he sleeps with one of the lead actresses (Naomi Watts) and flirts with Riggan’s freshly-rehabbed daughter/personal assistant, Sam (Emma Stone). Adding fuel to the fire, Riggan finds out that the other lead actress in the play (Andrea Riseborough) may be pregnant with his own child as Riggan’s ex-wife (Amy Ryan) occasionally pops backstage to remind Riggan of his past failures. One can understand how the surmounting pressures could make Riggan crack- and crack he does.

From the opening shot of “Birdman,” we see Riggan meditating in his dressing room, levitating in a lotus position. It’s here that Inarritu informs us that what we’ll see through Riggan’s eyes is the blur between reality and imagination- or is it? Can Riggan really levitate or, as we also see in the film, use telekinesis to move objects with his mind? It really doesn’t matter- Riggan’s skewed perception allows the imaginary to mimic real-life, thus becoming his reality. In watching a film that’s an internal examination of life through the eyes of someone whose sole purpose is to create illusion, the illusion’s going to be as real as anything else.

It’s this connection between the real and imagined facets of life that is the backbone of “Birdman.” As directed by Inarritu, the film feels like one continuous shot, each scene lasting several minutes. It’s the technique Alfred Hitchcock used for his film “Rope,” the adaptation of the play loosely-based on the real-life Leopold and Loeb murder, but never has it been as skillfully used as in “Birdman”- it serves its story flawlessly because, like “Rope’s” theatrical staging, we feel like we’re watching a play-within-a-play: “Birdman’s “story is set behind the scenes of Riggan’s stage play. While “Birdman’s” timeline covers only few days, the continuous flow of the film is a nice counterbalance to accentuate the perceived feeling of truth that Riggan must feel even when the events surrounding him become more fantastical. While we know the real-timing is off, its time continuum feels real, so for us it’s as real anything Riggan feels- like life, it’s a steady flow that makes any fanciful departure Riggan experiences plausible. Even in “Birdman’s” final scenes, we understand how our perception can be altered into accepting a delusion if it seems real enough or if the belief in that illusion is strong enough.

It’s the strength of Inarritu’s direction that grounds the fanciful moments in “Birdman” just as Michael Keaton’s strong performance anchors it. While Keaton’s real-life departure for a third sequel in the Tim Burton’s “Batman” franchise seems like the kitschy parallel that would make his choice to star in “Birdman” that much more entertaining (think of Liz and Dick’s real-life dynamic and what it brought to their depiction of a dysfunctional married couple in “Who’s Afraid of Virginia Woolf?”), it’s more of a testament to Keaton’s acting in “Birdman” that this connection barely crosses our mind. The accolades for Keaton in “Birdman” are justified- it’s a brave and layered performance. To conversely show the meaning of “Birdman’s” full title and what ‘the unexpected virtue of ignorance’ truly means, Keaton conveys this through his acting: in the pain of Riggan’s awareness and knowledge of his past failures as well as his haunted creative mind trying to sort out and overcome the mounting obstacles in his path.

As cracked as Riggan’s psyche may be, Inarritu’s skilled direction of “Birdman” deftly connects these cracks- it makes any perceived imperfections flawless.