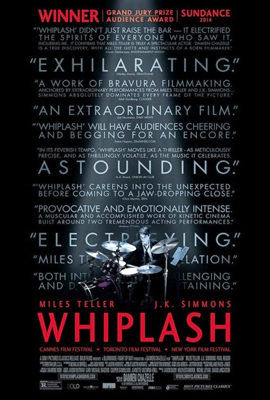 One of the things I love about independent movies is when they allow actors I’ve liked, relegated to supporting roles in studio movies, the chance to shine in the lead roles. Miles Teller (“That Awkward Moment,” “Divergent”) and J.K. Simmons (“Spider-Man,” “Juno”) do just that in “Whiplash.”

“Whiplash” is a film in the tradition of student-teacher stories where the teacher is the all-knowing, all-seeing taskmaster who breaks the student down to build them back up on the solid foundation of the basic knowledge that will allow the student to continue to build and excel in whatever skill they’re trying to master. The tougher the teacher, the more the student respects them because they both want the same thing- perfection. As tough as we can be on ourselves to master any skill, we need constant pushing from that outside influence we view and respect as a master themselves. Quitting is not an option and only our best performance will do.

“Whiplash” derives its title from a jazz composition that Andrew (Teller), a student drummer at New York’s prestigious Shaffer Conservatory, is given to perform by Terence Fletcher (Simmons), a renowned instructor at the school who handpicks students to be in his elite jazz ensemble. To be selected by Fletcher is what every student at Shaffer wants- his ensemble performs at the musical competitions that can make any student a star. To keep your spot in Fletcher’s ensemble and stay within that spotlight, you have to show Fletcher that you have what it takes. You have to prove to Fletcher that he wasn’t wrong in selecting you and, believe me, you don’t want to prove Fletcher wrong. Performing ‘Whiplash’ to Fletcher’s standards is just one of the obstacles Andrew is forced to endure to remain a part of his ensemble.

Fletcher is an imposing figure: dressed only in black, his lean figure suggests the rigorous training he instructs. Fletcher slinks around the school and roams the halls to listen at classroom doors to hear the music students play- if you hit the right notes and your timing is right, he will select you to be a part of his elite group. But to remain under his tutelage, your real test awaits once you’re inside his studio. Fletcher administers challenges far above whatever music you’re given to perform- under his scrutiny, one false note or any improper tempo you perform will attract his attention. Once you’ve attracted Fletcher’s attention and come under his steely gaze, you had better perform the music in the exact same way Fletcher hears it inside his head.

To not perform to Fletcher’s standards incurs his wrath. Corporal punishment and profanity are tactics Fletcher employs to bring out perfection in his students. Within his studio’s walls, he calls and literally gives the shots: he will slap a student’s face repeatedly to ensure tempo and scream racial and sexual obscenities at students who have not performed to his standards. How can Fletcher get away with all of this? His studio is his domain, and within those walls he is the master of that domain. Just as a platoon will endure a drill sergeant’s training to become soldiers or fraternity pledges will endure hazing to become brothers, Fletcher’s students endure the physical and psychological tests he doles out to become professional musicians.

For Andrew, appeasing Fletcher is paramount. Andrew practices until his hands bleed from the drumsticks’ chafing; sweat pours off of him and it reflects in the light on the cymbals of his drum kit. Fletcher senses Andrew’s drive to be the best and places him as lead drummer. In that position, Fletcher will accept nothing less than Andrew’s best, and Andrew’s best requires every ounce of his concentration and energy. But to be the best by Fletcher’s definition, Andrew will not only have to perform the music perfectly, he will have to withstand every obstacle Fletcher can hurl at him.

“Whiplash” is an intense battle of wills between a young student obsessed with being the best and the older teacher accepting nothing less than that. It’s a story dynamic we’ve seen work well in films like “The Paper Chase,” “Educating Rita “and “The Karate Kid,” but to give you a sense of just how well “Whiplash” accomplishes this, the movie I was reminded of most was “An Officer and a Gentleman.” The obsession with perfection, unorthodox methods to achieve that goal, physical and psychological tests, and an intensity to not quit in the face of these obstacles are the hallmarks that both of these movies share. Just as “Officer” gave audiences one of Richard Gere’s best performances and earned Louis Gossett, Jr. an Oscar, “Whiplash” gives us Miles Teller’s best performance since “The Spectacular Now” and should give J.K. Simmons a much-deserved Oscar nod. The intensity and intelligence that Teller and Simmons have shown as actors in their previous films complements not only their respective characters, but the storyline of “Whiplash” as well.

“Whiplash” is one of this year’s best films. In a movie about the price people pay in striving for perfection, it hits all of the right notes.