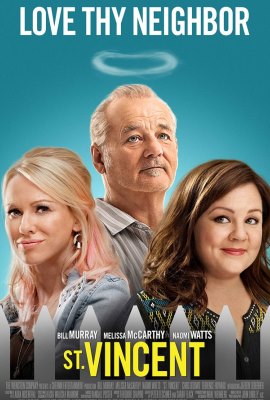 In a cinematic career spanning 35 years, Bill Murray has had few missteps. His sarcastic, juvenile good-natured antics have kept us entertained for decades and his appearance in a movie has always guaranteed a bright spot in our movie-watching day. He’s the guy you depend on to give you a smile; he’s the guy you root for- Murray never lets you down.

And Bill Murray doesn’t let you down in “St. Vincent” either – his performance in the title character of Vincent McKenna is one of his best. While on the surface his role as a curmudgeon forced to endure the company of a child may seem like another retread of stuff we’ve seen in movies like “Little Miss Marker,” “Bad Santa,” or even last year’s “Bad Words,” Murray elevates the material because, well, he’s Bill Murray. If you’re going to have a jaded elder display bad habits or unsavory behavior in front of a child in his care, you won’t find many actors who do it better than Murray – he has the innate good-heartedness despite the rough exterior. While other curmudgeons gain respect or affection in their newly formed relationship with the naïve, impressionable child because the child can endure their unconventional ways, Murray excels in connecting with that child because he’s got the same trusting heart; they bond because they both share that same inner curiosity and wonder of life’s experiences.

Though Murray’s character of Vincent McKenna has seen his share of life experiences and been beaten down in the process, there is an inner goodness and light that becomes more apparent the more we get to know him, as we do through the eyes of Vincent’s new 12 year-old neighbor Oliver (Jaeden Lieberher). Having moved next-door to Vincent after his mother Maggie (Melissa McCarthy) relocates them for work while divorcing her husband, Oliver is forced to seek refuge in Vincent’s house one day after school. Oliver’s clothes, phone, and house keys have been taken by bullies at school and, seeing Vincent upon his return home, Oliver asks if he can use Vincent’s phone to call his mom- he can’t get into their home until she returns. Vincent agrees (the kid’s polite enough) and after Oliver calls Maggie, Maggie asks to speak to Vincent. Maggie thanks Vincent for looking after Oliver, and Vincent sees this as an opportunity for some free cash- he’ll continue to help Maggie and watch Oliver for the few hours between Oliver’s return from school and Maggie’s return from work for an hourly wage. Maggie agrees; her hand is forced.

As a man who has isolated himself within a cocoon of vices (going to the racetrack and losing money, drinking bourbon and dancing by the jukebox at a neighborhood bar, sleeping with a pregnant Russian stripper named Daka (Naomi Watts)), Vincent would seem a poor choice for a babysitter. But Oliver learns, as we do, Vincent’s heart is in the right place. After asking if Oliver’s hungry, Vincent looks through his cupboards for something to give him as an afterschool snack. Vincent presents Oliver with “sushi”- sardines served on Saltine crackers with a bottle of hot sauce. A quick cut to Oliver finishing his sardines and laughing as he watches TV is all we need to know that this babysitting arrangement will work.

It’s in their time together that Vincent emerges as a guide and protector. Vincent teaches Oliver to defend himself against the bullies at school and even steps up to the bullies when he sees Oliver in trouble- albeit with a tire iron and, to be fair, Vincent does threaten the bullies’ mothers instead of hurting the children- did I mention, while unconventional, he has a good heart? Vincent also wants to show Oliver some of the things he enjoys. One of the best scenes in “St. Vincent” is a quick trip to the track and Vincent letting Oliver pick the horses in a trifecta bet. Oliver’s bet wins and Vincent and Oliver try to contain their excitement; Vincent needs them to contain their excitement as there are men at the track to whom Vincent owes money. The following getaway scene of Vincent and Oliver running through the parking lot in slow-motion is great because, again, with Murray as Vincent, you’re watching two kids scamper away from the scene of some juvenile prank they’ve committed- it works because Murray is that overgrown kid. It also works because while other curmudgeons might have swindled the kid out of the money after their newly-found windfall, Vincent places the money in a bank account for Oliver.

It’s tough to talk about “St. Vincent” without constantly talking about Bill Murray. Not only does he play the title role, everyone in the supporting cast and everything in the movie revolves around him. What makes “St. Vincent” truly good is that everything surrounding Murray/Vincent is truly good: from the supporting actors, especially McCarthy (who plays “straight man” to Murray) and Watts (who takes the throwaway stripper role and creates a caring, interesting character) to the film’s story that never gets contrived or strikes false notes.

Murray’s definitely going to get an Academy Award nomination for “St. Vincent.” In a role reminiscent of his first critically-acclaimed and award-garnering role in “Rushmore,” there’s even a portion of “St. Vincent” where Vincent’s character suffers a malady that allows Murray to show some real acting chops- the malady itself is pure Oscar bait. You’ll even stay through the end credits to watch Murray listen to his Sony Walkman, sing along to a Bob Dylan tune, and water the remnants of his dirtpatch backyard with a garden hose because Murray’s performance is just that good; you want to spend as much time with him as possible.

At Oscar time, I hope Murray gets to clutch the golden statuette just as Ted Knight clutched his lucky putter Billy Baroo in another of Murray’s standout movies “Caddyshack.” Only this time, Murray’s Oscar win will be the perfect real-life ending to the cinematic Cinderella story of this Cinderella boy.