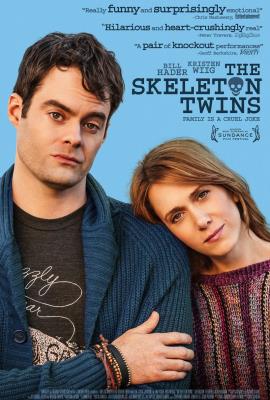 With the onset of autumn, the days getting shorter and the cool air closing in, we can all become introspective based on the physical nature of the weather around us. Sometimes that’s all you need to connect with a movie- a movie that has the same atmosphere as the world around you because the characters you’re watching are in a similar physical or psychological place. While there’s sunshine that has sporadic warmth, there’s also an underlying chill that can be as refreshing as it is numbing. Such was my experience with “The Skeleton Twins.”

It’s a perfect movie for the fall- a small, independent movie whose main characters have an underlying chill that sporadically generates warmth. While this hot/cold dynamic may be true of all siblings, it may be more so for fraternal twins- doubly so for estranged ones. That’s the case in the “The Skeleton Twins” depiction of Maggie and Milo, a brother and sister who have not seen each other in ten years but are forced to reconnect through traumatic events.

“Twins” begins with Milo (Bill Hader) attempting suicide- the old “warm water in the bathtub” routine. His failed attempt prompts the hospital to call his twin sister, Maggie (Kristen Wiig)- although they haven’t seen each other in ten years, she’s all he’s got. Ironically, Maggie receives the call as she herself is about to attempt suicide by swallowing a handful of pills (validating that like-minded twin connection we’ve heard so much about). Maggie visits Milo and takes him back to her home: to the place where they’ve grown up; to heal as his body recovers from his trauma. Of course while healing Milo is the mission, coming back home and reconnecting in a long-lost relationship with Maggie opens up more wounds than any razor blade could do.

Reliving and confronting a damaged past, while painful, is really what’s required to heal. In a story whose main characters have failed expectations and cope in defensive, destructive personal ways, there’s nothing like the bond between siblings or people who’ve shared a similar unhappy experience to begin that healing process. Misery deserves company, and no one understands what you’re going through better than someone who’s already been there.

It’s here that “The Skeleton Twins” story is strongest. While their past has caused destructive personal behavior, Milo- trying to respark a homosexual relationship with a man who molested him as a child as Milo believes it was not molestation but a loving, passionate affair, and Maggie- whose fiancée (Luke Wilson) wants to have a child but is unaware of Maggie’s use of birth control pills or her random infidelities, “Twin’s” depiction of these damaged main characters doesn’t pander but instead builds a nice foundation for situations that might otherwise sink into contrived melodrama. It’s a smart screenplay that preserves the chill of a past best-not-remembered while adding spots of warmth in the bonding that Milo and Maggie share as they heal not only themselves, but their estranged relationship as well.

Screenplay aside, the bonding that happens between Milo and Maggie wouldn’t be as convincing or real as it feels were it not for Hader and Wiig. As with their characters in “Twins,” we’ve seen them excel separately in movies like “Bridesmaids” for Wiig or “Superbad” for Hader, but it’s that shared past from their work on TV’s “Saturday Night Live” and their individual talents on that program that first brought them to our attention. This coupled with the familial bond of being part of the same SNL ensemble carries over to their roles in “The Skeleton Twins” and adds that believable layer of sibling closeness in the bond they share that’s been embedded in our television-viewing subconscious.

One of the highlights of “Twins” is Milo lip-synching Jefferson Starship’s “Nothing’s Gonna Stop Us Now” in an effort to cheer up/bond with Maggie. As the song and Milo’s performance progresses, we see Maggie eventually wear down and begin to sing along. In Maggie joining Milo’s song-and-dance, we see the bonding between them not only making the title of the song ironically bittersweet but, in the real-life relationship between Hader and Wiig, all that more relevant and entertaining.

So while the air may begin to get colder, it’s a comfort to know warmth is just around the corner. Hader and Wiig provide that much-needed warmth in “The Skeleton Twins.”