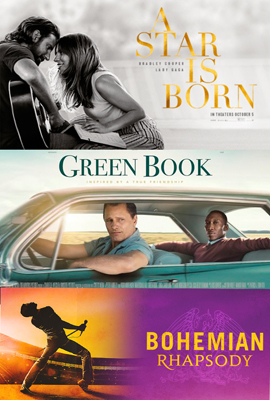 With the Oscars being presented on Sunday, February 24th, I like to focus on the films and performances that I found most memorable. In keeping with the tradition of the late Siskel & Ebert’s “If We Picked the Winners,” here are my standouts for 2018 using the nominees in the main Academy Award categories. While others try to second-guess Oscar politics with who ‘should win’ or ‘will win,’ I like to keep it simple. In case you missed any of them, these are the films and performances that I’ll remember- simply put, these are the ones:

Crafted as a love letter to the two women who raised him, director Cuaron does two things amazingly well: he taps into his inner-Fellini with sequences showing a mastery of camera work and choreography while drawing the audience into the intimacy of an upper-class household.

The film’s set squarely on the shoulders of live-in housekeeper Cleo (Yalitza Aparicio), but it’s her relationship with employer Sofia (de Tavira) that becomes crucial as the story progresses- and that’s where de Tavira shines. In her role as family matriarch, de Tavira becomes the ‘rock’ of “Roma:” giving unexpected support to Cleo beyond social status, showing empathy and bonding with another woman in a time of gender inequality, appearing strong while breaking down in private. It’s a heady job juggling what Sofia endures, but de Tavira delivers.

Whether we’re watching an interior scene of furniture shopping slowly panning to a mob melee outside or an operating room whose sedate foreground belies an erratic emergency background, Cuaron shows the world of “Roma” as one of alternating calm and chaos. In a style that allows us to discover the unseen beauty and wonder in the ordinary, Cuaron creates the extraordinary.

A true story set amid the racial unrest of 1962, “Green Book’s” screenplay brings two diametrically opposed people together: a tough, bigoted Italian and a serene, cultured African-American. How the two men gain mutual respect to form a friendship comes in a deft combination of character likability (thanks to Nick Vallelonga writing about his father, Tony), smart dialogue and situational humor. With comedic strength courtesy of co-writer Peter Farrelly (“There’s Something About Mary,” “Dumb and Dumber”), “Green Book” is better than a standard lesson of segregation’s stigma- it’s an entertaining, intimate portrait of decency triumphing over difference.

What gives Malek the edge is energy, and he exudes it performing as rock music renegade Freddie Mercury.

As Queen’s flamboyant front man, Mercury was a powerhouse. Malek conveys that power by showing Mercury’s confidence, whether strutting onstage or embracing a closeted gay lifestyle.

Malek sets himself apart by being better than the scenes written for him, scenes depicted in such a safe tone that his turn as Mercury could have wound up salacious or silly. They don’t, and that’s to Malek’s credit as an actor.

Focusing on the love story at its core, Bradley Cooper gives Hollywood’s classic tale of an ingénue’s meteoric rise a down-to-earth approach.

Cooper’s take on the tale is natural and that’s what makes it so good. Never forgetting that buying into the love story is paramount, Cooper lets the relationship unfold organically and keeps the key elements of the story intact (thanks to a screenplay co-written with Eric Roth, Oscar-winner for “Forrest Gump”).

Lady Gaga impresses as the ingénue Ally, whose tough, cynical make-up melts in a Cinderella-style romance- it reminds you of Cher’s Oscar-winning work in “Moonstruck.” Gaga believably shows the insecurity of a burgeoning musician who, supported by the love and belief in her talent by rock star Jackson Maine (Bradley Cooper), is allowed to blossom into an overnight sensation. While Gaga’s real-life musical talent was proven (showcased well in the film, particularly in a nightclub performance of “La Vie En Rose”), it’s her quieter moments of tender vulnerability that surprise us with their strength.

As Jack’s brother Bobby, Sam Elliott shows the internal elements driving an angry demeanor. Resentful of his brother’s musical success where his own had failed, Bobby acts as Jack’s manager/caretaker while watching Jack slip into a downward spiral of addiction. Watching someone he loves slowly slip away tempered with a parental role mixed with sibling rivalry, Elliott expertly shows the nuances of his character’s complex emotions.

There’s a scene in which Bobby tells Ally that all songs are essentially the same twelve musical notes between octaves- an artist can only offer how he sees them. In this fourth film version of “A Star Is Born,” Cooper arranges the familiar notes perfectly.

Enjoy this year’s Oscars and in discovering the future Oscar winners of 2019.