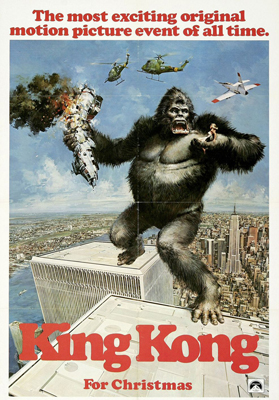 On this 15th anniversary of 9/11, one movie stands to assure that I will never forget.

Growing up, I spent the majority of my formative years glued to a television gorging myself on a steady diet of B-horror movies. In 1976, while America celebrated its bicentennial, I was a 7 year-old celebrating an early Christmas with the release of Dino De Laurentiis’ remake of “King Kong.”

In retrospect, there were a few memorable things about seeing “King Kong” (apart from Kong, of course). The first was going with my parents- when both my Mom and Dad went to the movies with me it meant they were both interested in seeing it (which was rare). The second was America’s first glimpse of the sexy ingenue that Dino found to make Kong go ape: Jessica Lange (at that time, no one would have guessed Lange would sustain cinematic longevity and receive two Oscars along the way after being shoved under a waterfall and blown dry by an amorous Kong in her film debut). The third was the climactic death scene of Kong, “the eighth wonder of the world,” atop the architectural wonder of our time and modern-day castle befitting a King: New York City’s World Trade Center.

My first glimpse of the World Trade Center was through Jeff Bridges’ eyes. Kong, upon breaking loose from Fred Wilson’s (Charles Grodin’s) caged harness, begins to run amok on the island of Manhattan and it’s anyone’s guess where he’ll wind up. Jack Prescott (Bridges), the anthropologist who was on Skull Island when Kong was captured, is running amok himself trying to find Kong. Suddenly, Prescott stops, gazes upward, and we see his realization in knowing where Kong is headed. In Bridges’ P.O.V. shot, we see the Twin Towers slowly dissolve into two vertical rock formations from Skull Island. We know what Prescott knows: Kong’s headed to the World Trade Center; he wants to go home (as I’m sure half the theater audience did). Kong learns the hard way that you can’t go home again when he climbs the towers and “’twas beauty killed the beast” seemed a profound thought compared to the heavy helicopter gunfire that actually brings him down.

Eleven years later, while attending N.Y.U., I got to see the World Trade Center in person. I was as impressed as Kong, not only by the sheer size of the Twin Towers but in the manpower and ingenuity involved in creating them. They were also practical in navigating the streets of New York. If I ever forgot which direction I was headed while walking around SoHo, I could look up and they’d tell me which way to go. The towers were a comfort to me; I couldn’t imagine New York City without them. Nothing prepared me for that tragic change to Manhattan’s skyline in 2001.

In the 15 years since 9/11, I’ll find myself watching an old movie and they’ll be there. Whether Christopher Reeve is showing Margot Kidder what they look like flying over them in “Superman” or, in the Plaza below, Dan Aykroyd is coaching Eddie Murphy on how to beat Don Ameche and Ralph Bellamy out of their money in “Trading Places,” the Twin Towers continue to stand.

With the immortality that movies provide, the World Trade Center will forever remain as strong and powerful as I remember them having to be to support the weight of King Kong.